Artisan Apple Bread is a family favorite that is easily put together but tastes just like it was baked at a world-class French bakery. And then, I added homemade maple butter to spread on the bread. Try my Apple Fritter Bread for another homemade bread that will be a hit with family and friends.

Artisan bread is best defined as who is making the bread. An artisan baker is a craftsperson who is trained to the highest level to mix, ferment, form, and bake a hand-crafted loaf of bread. They incorporate the science behind the chemical reactions of the ingredients and use them to create the most optimal environment for the bread to develop. However, it can also be about the science behind the recipe. Artisan bread is all about the ingredients. They typically have flour, yeast, water, and salt. Some add in flavors and herbs like apples or tomatoes. With all artisan bread, it is important that every ingredient be real and familiar. No chemicals.

Cool Water: When making the bread dough, you need cool water added to the yeast.

Yeast: For the yeast to work with cool water, it needs to be instant yeast (NOT active dry yeast).

Apples: I love using Granny Smith apples in baked goods like this bread. They hold their shape the best and have a delicious tartness to them. Braeburn or Honeycrisp apples would also be flavorful in this bread.

I got the beautiful Crofton Cast Iron French Oven (4.6-quart size) you see in the picture at ALDI. Based on a need for a lighter and easier-to-care-for Dutch Oven, companies took the basic concept of a Dutch Oven and added the enameled coating. These were then referred to as ‘French Ovens’ to try to distinguish them from Dutch Ovens. French Ovens are just as popular as Dutch Ovens (it’s probably what you have!), but the term French Oven itself never really stuck.

What is a Dutch oven? A Dutch Oven is typically made of all cast iron, has a tight-fitting lid, and can be used in the oven, on the stovetop, or over an open flame. They are often seasoned inside (like how your cast iron skillet is seasoned) and if so, aren’t ideal for baking sweetbreads after they have been used for savory cooking.

If you want to make a crispy, crusty, gorgeous loaf of Artisan Apple Bread at home, the French Oven is the way to go.  It is the perfect vessel for making artisan-style loaves. The steam that’s created inside the pot miraculously transforms the dough, ensuring the bread’s crust will break into perfect portions.

When I tried this butter on the bread I was blown away by how amazing they tasted together. The secret was the maple syrup. I used 100% Pure Maple Syrup and love the depth of flavor and sweetness it adds to the butter. I just might have to keep some in my fridge all year long because it goes great on everything!

How to Serve Artisan Apple Bread

Instead of cutting this bread into slices, tear off pieces of the bread when serving! Then, smear some maple butter on your piece and enjoy!

How to Store Artisan Apple Bread

To store this bread, keep it at room temperature. It will last, in an airtight container, for up to a week. The maple butter will last in the refrigerator for about a week as well, wrapped in plastic or in a sealed container. Perfect timing for a perfect match!

Can I Freeze this Bread?

Sure! If you are not going to enjoy the bread within a week, don’t let it go to waste! Freeze the bread instead. It will last in the freezer for up to 3 months. Be sure to label and date the packaging. 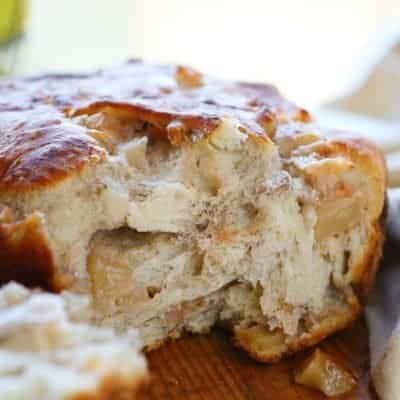 Prep Time 30 mins
Cook Time 1 hr
Proofing Time 10 hrs
Total Time 1 hr 30 mins
This Artisan Apple Bread is a family favorite. Perfectly baked every time (it really is easy!) but tastes just like it was baked at a world-class French bakery. Have no fear, Artisan Bread is a fantastic way to show off your baking skills!
SaveSaved! Print Rate Comment

Apple Bread Dough (DO THIS THE NIGHT BEFORE)

Chopped Apples (START THIS AFTER BREAD HAS PROOFED 8 HOURS)

Apple Bread Dough (DO THIS THE NIGHT BEFORE)

After Dough Has Proofed

When You are Ready to Bake