This Beer Bread recipe is not only simple, but it is also out of this world delicious! Follow my tricks to make an out-of-this-world Beer Bread! I promise it will be the only recipe you will ever need!

I made no less than 10 different beer bread recipes before coming back to the basics. This recipe is based on one my grandma made in the 1970’s using Schmidt’s beer. No one ever told me it had beer in it, and I certainly never asked! But I do remember it having the most amazing unique flavor that I never experienced at home. I always thought grandma just had a special magic when it came to baking. (Truth is, I think she does!)

We liked IPA beers the best, but here are our favorites:

One amazing thing about beer bread is that it can be changed depending on the season. Try a pumpkin, apple, or honey flavored beer for an extra flavor punch. I haven’t tried Guinness Beer Bread, but I hear that it is fabulous.

When I visited grandma and she generously shared her recipe with me, we talked about why she did it the way she did. She actually used lard instead of butter as it was more economical and readily available. (They didn’t have much and always made use of what they had!) She would place the lard on top of the beer bread before placing in the oven. I found that fascinating and asked her why… she said ‘because that’s how my mom did it’. Fair enough!

I also listed salt as optional in this recipe. We love a saltier bread and even sprinkled some sea salt over the finished product! You can certainly omit the salt if you prefer.

Grandma also didn’t add sugar to hers, so I am leaving that out of the recipe. However, it is an important ingredient depending on the beer you use.

I started with an IPA beer and found that no additional sugar was needed. The power of that beer was enough to properly flavor the beer bread. I eventually ended up using a Miller Lite in the recipe (as we like to drink the IPA too and were out!) and didn’t think the bread was as flavorful. So I added 2 tablespoons of granulated sugar and LOVED how it turned out. You can add anywhere from 1-4 tablespoons in this beer bread recipe, and it should be done according to your tastes.

If you prefer a sweeter beer bread but don’t want to use granulated sugar, you can use honey! About 1/4 cup works best in the recipe I have shared below.

Butter matters! After making a zillion beer bread recipes I found that I liked a SALTED butter and that it should be as organic as possible. Dark in color and rich in flavor. If I was going to try and replicate what lard did in grandma’s recipe, I needed to make sure that I was using a high-quality butter! One of our favorites was an Amish salted butter that I found at the co-op. I also loved Challenge Butter!

As you will see from my base recipe, beer bread is one of those breads that can be easily customized to fit your tastes.

Add 1 to 1 1/4 cups cheddar cheese to the batter. I like to reserve about 1/4 cup to spread over the top of the bread before baking. You can also add 1 teaspoon of garlic powder and dried rosemary to kick it up a notch!

Add in 1/2 cup mini chocolate chips (plus more for sprinkling over the top), use 1/4 cup of brown sugar, and a chocolate flavored beer.

The sky is the limit when it comes to making beer bread! What is your favorite flavor?

Here is a video on how I made this Beer Bread. I used Coors for this version. 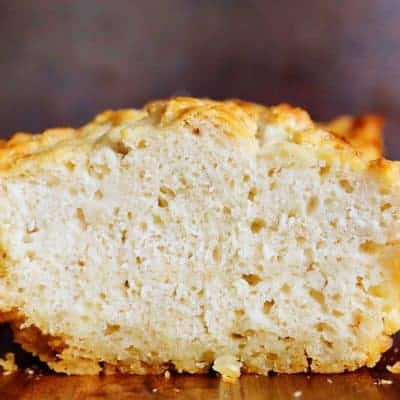 Prep Time 5 mins
Cook Time 45 mins
Cooling Time 5 mins
Total Time 50 mins
The only Beer Bread Recipe you will ever need! It’s all about the beer (of course) and the butter!
SaveSaved! Print Rate Comment

**If using granulated sugar you can use 1-4 tablespoons. The use of sugar is based on the type of beer used and your preferences. When using a lite beer I used 2 tablespoons and found it to be sweet enough. If you prefer a sweeter beer bread use all 4 tablespoons. **I listed salt as optional. We love how to brings out the flavor but again, it really depends on what kind of beer you use.