Almond Paste is a nutty paste that is made with blanched almonds, confectioners’ sugar, an egg white, almond extract, and salt. It is perfect for pies, cakes, candies, and pastries. I use it in my Almond Cake, but is a family favorite!

Yes, you could buy a jar of almond paste at the store, but why not make it at home instead? When you make it at home, you know exactly what is in it without any added preservatives. And, it will last for quite a while so you have it for all of your almond-flavored desserts.

Almonds: Look for whole, natural almonds. They do need to be blanched, which I explain how to do in the recipe. You can also use slivered almonds in this recipe. Start with “Paste” in the recipe directions.

Egg: You will just use the egg white, lightly beaten, for this recipe. To separate the egg white from the yolk, simply crack the egg over a slotted spoon that is over a bowl. Let the egg whites fall through the slots in the spoon. Don’t worry about the raw egg white; the paste will be used in baking, not eaten raw.

Almond Extract: For even more almond flavor, be sure to add almond extract to the paste.

There are many similarities between almond paste and marzipan. They are both almond-flavored concoctions and both are used for almond-flavored treats. However, there are some differences as well:

Do I Have the Blanch the Almonds?

Almond paste lasts for quite a while, so it will be available to use in your treats. Wrap the paste in plastic wrap (doubling the wrap is even better) and store it in the refrigerator for up to a month. Or, freeze it for up to 3 months. Let almond paste come to room temperature before use. 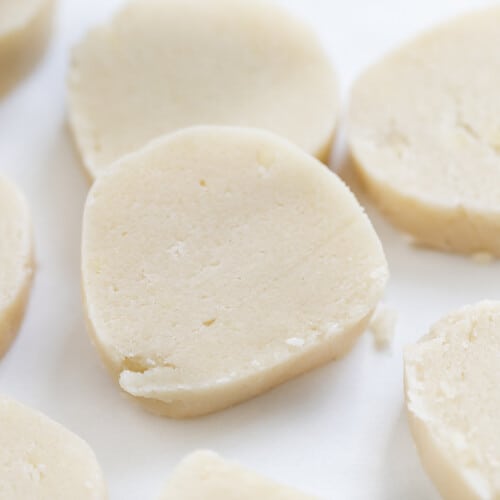 Almond Paste is a nutty paste that is made with blanched almonds, confectioners' sugar, an egg white, almond extract, and salt.
SaveSaved! Print Rate Comment

Where to Buy Almond Paste

Just in case you have decided you don’t want to make this, you can certainly buy it. I like the Odense brand of Almond Paste that comes in a 7-ounce tube on Amazon. Most grocery stores also carry almond paste in their baking aisle or near where they would sell almonds.