Cinnamon Roll Pull-Apart Bread will fill your house with the wonderful smell of freshly baked sweet rolls but in a loaf of bread. Pull-apart bread goes by many names, like monkey bread, bubble loaf, sticky bread, and a few more. But, whatever you call this bread, it’s so delicious! It is meant to be shareable, but once you ‘pull apart’😉 your own piece, it will be hard not to eat the entire loaf yourself! 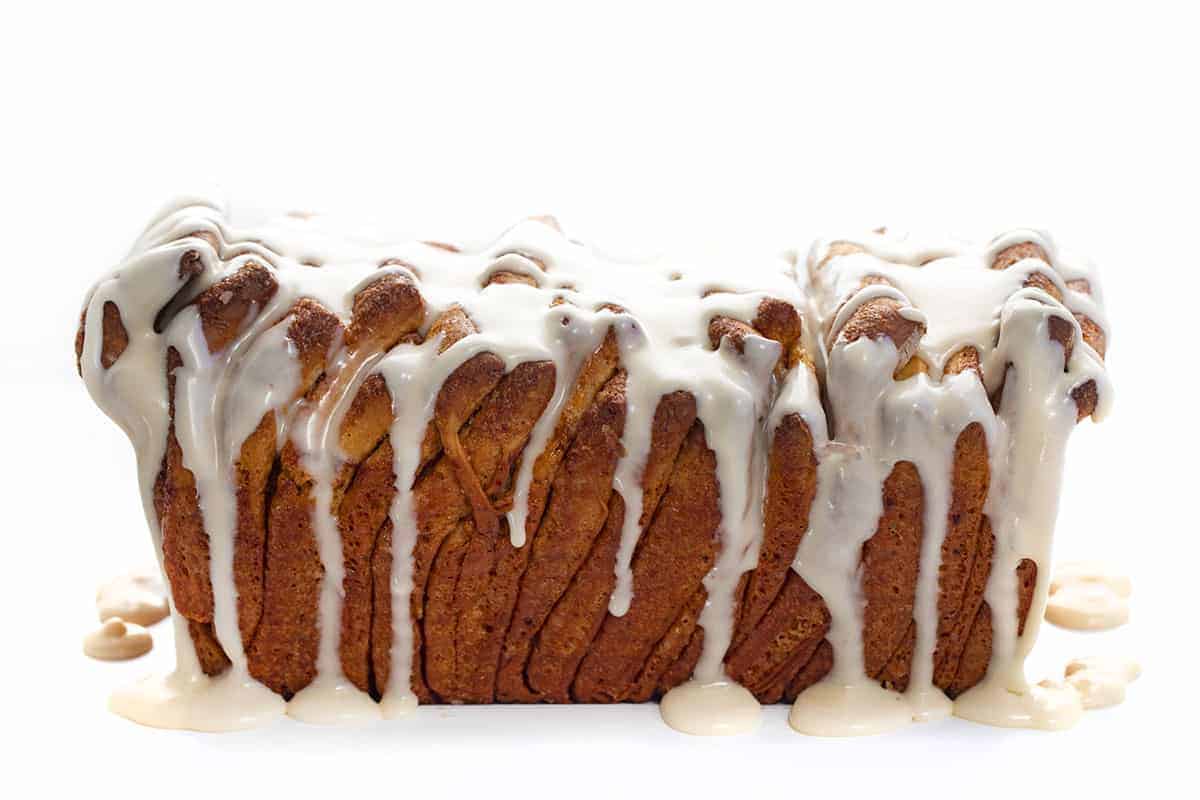 There are no fancy ingredients needed to make this recipe. In fact, you may have what you need already on hand! Just be sure to use room temperature cream cheese and butter for the frosting.

When it comes to the confectioners’ sugar used in the frosting, sift it before adding it to the mixture. Sifting will get out any lumps and add air to keep it nice and fluffy. This, in turn, will give you a lovely whipped frosting. If you don’t have a sifter, use a fine-mesh strainer or use a whisk to add air to the sugar. 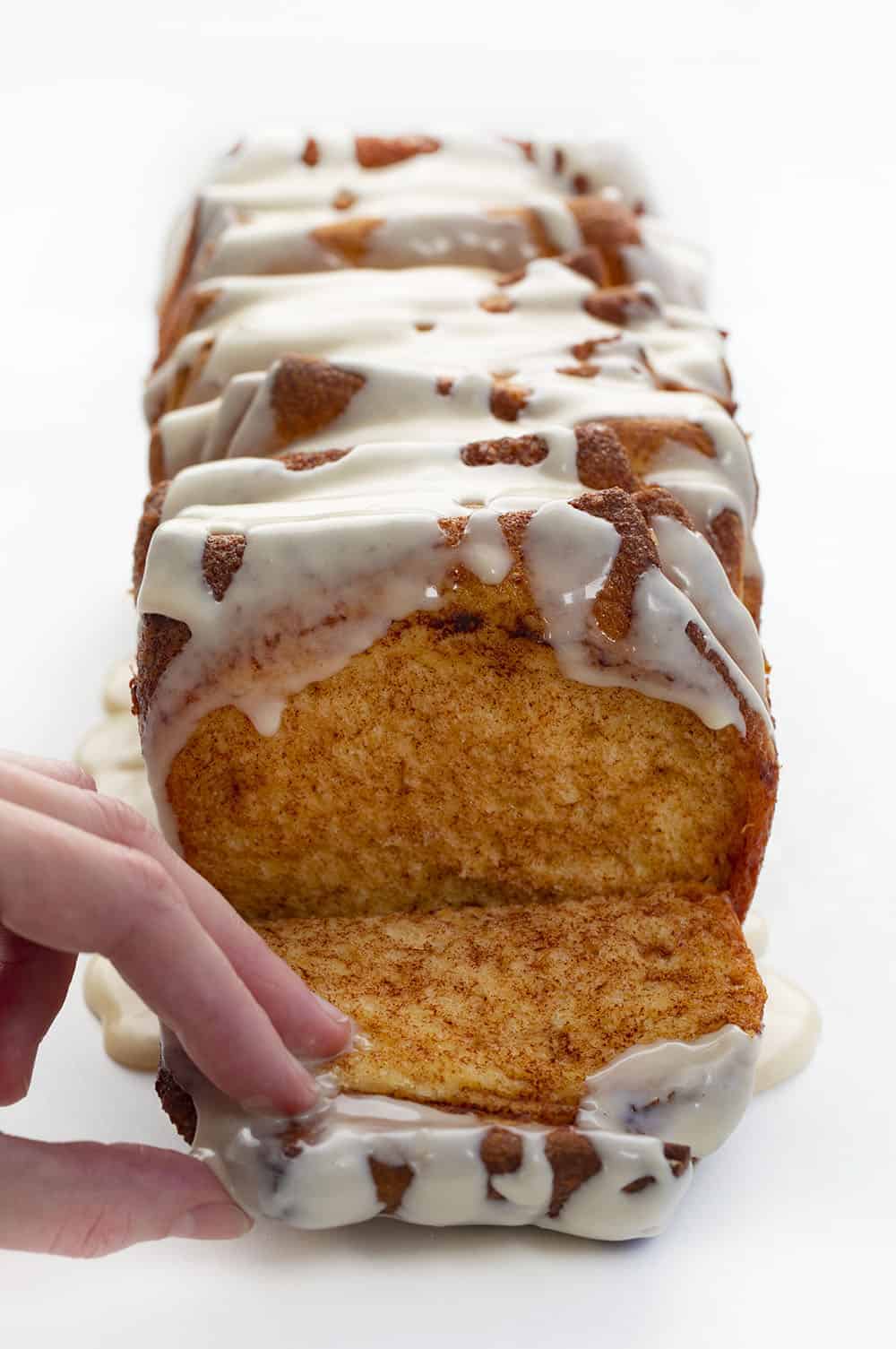 In the bowl of a stand mixer, combine the flour, sugar, salt, and yeast using the dough hook attachment. With the mixer on low, slowly add the butter, milk, water, vanilla, and then eggs. Turn the mixer on medium-low and knead until the dough is soft and smooth (about 2 minutes). If it seems too dry add a little water, if it seems too sticky add just a little flour, up to a 1/4 cup. Place the dough into a greased bowl, cover it, and let it rise for about an hour.

After the dough has had time to rise to double its size, it’s time to roll it out. Gently deflate the dough and place it on a floured work surface. Roll the dough out to about a 12×20-inch rectangle. Prepare the filling to add to the dough.

To make the filling, melt the butter and set it aside to cool. In a small bowl, combine the brown sugar, cinnamon, and salt. Pour the melted butter over the entire surface of the rolled out dough. Then, sprinkle and spread the brown sugar and cinnamon mixture over the dough, making sure to get all the surface covered. 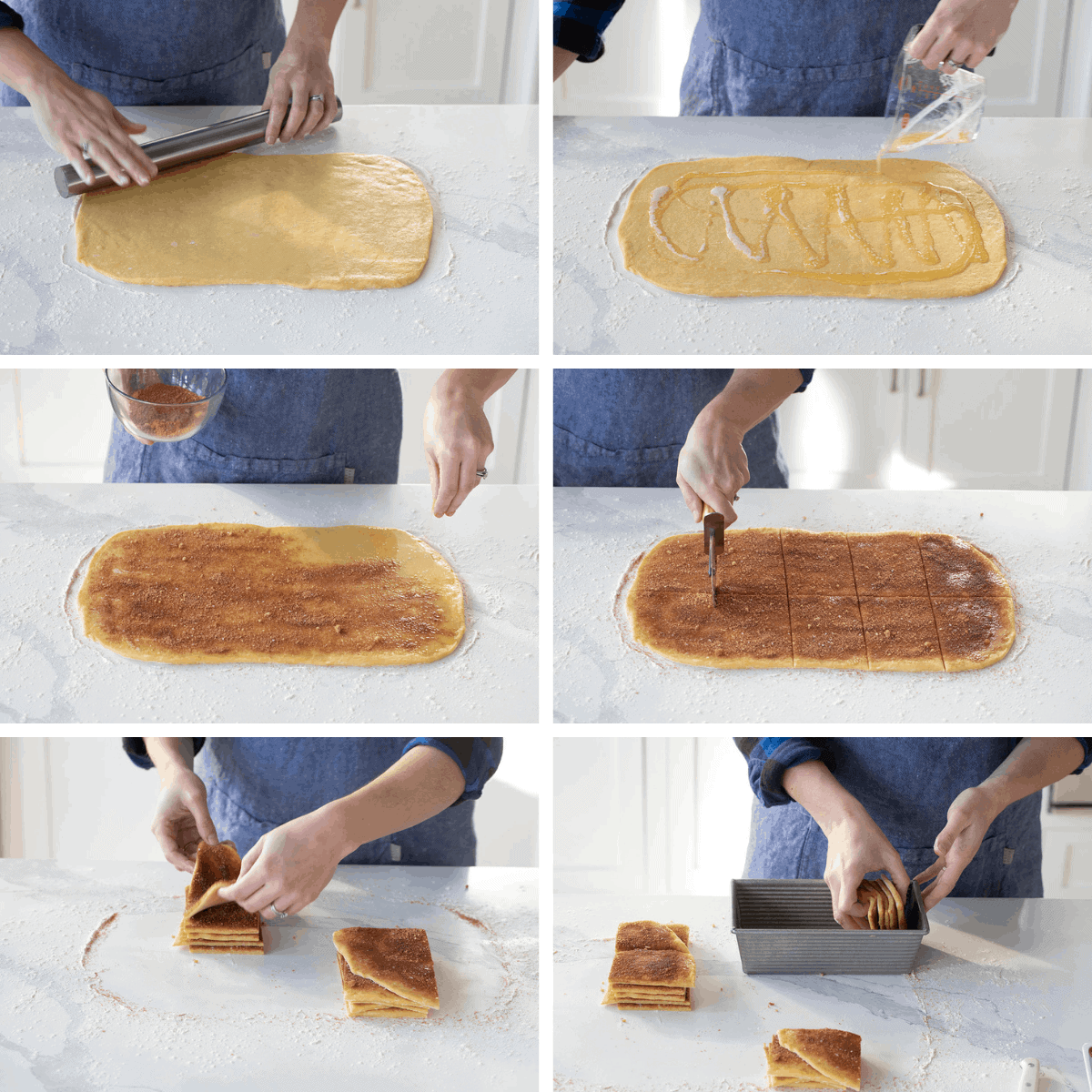 Cut the dough crosswise into six long strips. Make sure you have a knife that is long and sharp as well as wide enough that you could use it to move the long pieces of dough over to the stack. Stack the strips on top of one another. After all the strips are stacked, cut the stack into six pieces.

Finally, start setting the sections into the pan making sure that the dough is upright, or stacking horizontally, not vertically. Cover the loaf with a clean towel and let it rise again for 30-60 minutes. (I know…more waiting, but it will be worth it!)

After the hour, bake the bread for 45-55 minutes, tenting it with aluminum foil after the first 30 minutes. You will know the bread is done if a toothpick comes out with a few crumbs on it, but no batter. Remove the bread from the oven and let it cool for 15-20 minutes before transferring it to a wire rack to cool completely. As the bread is cooling, make the cream cheese frosting. 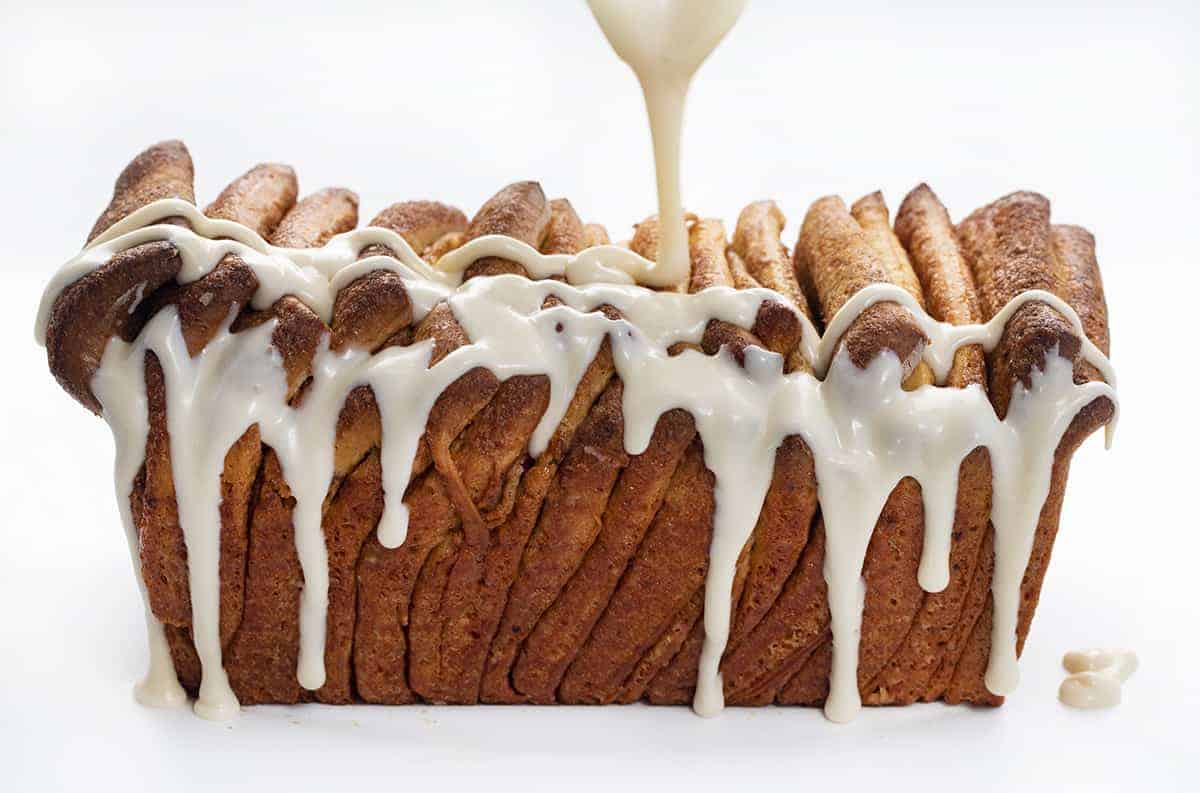 How to Make Cream Cheese Frosting

It only takes a few minutes to whip together this cream cheese frosting for the bread. So, while the bread is still baking, or even cooling, put the cream cheese, butter, confectioners’ sugar, vanilla, and salt in the bowl of your stand mixer. Using the paddle attachment, start on low to get all the ingredients combined. You could also use a handheld mixer.

Mix on high for 4-5 minutes, or until the frosting is light and fluffy. Spread this all over the warm loaf of bread. Serve warm. 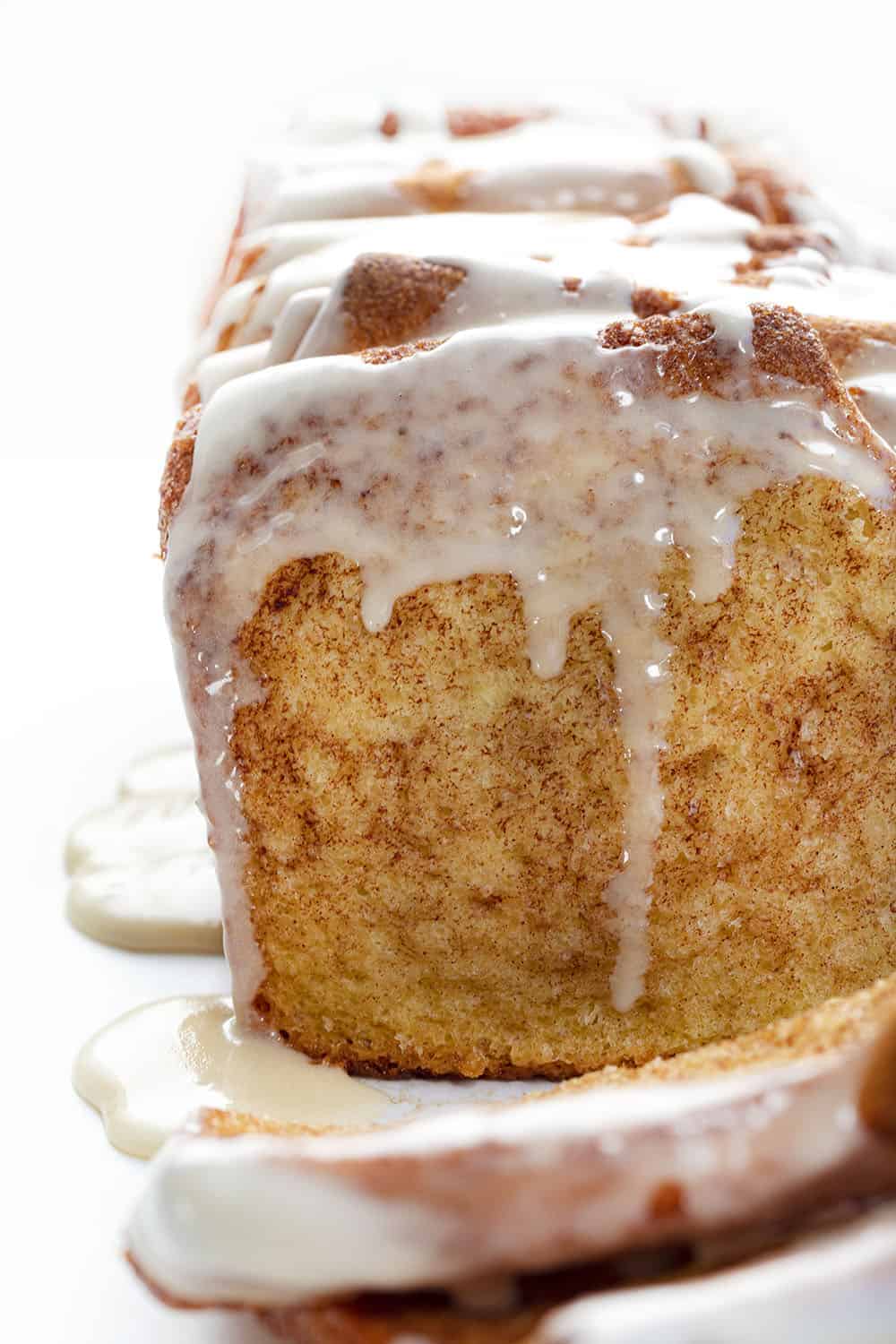 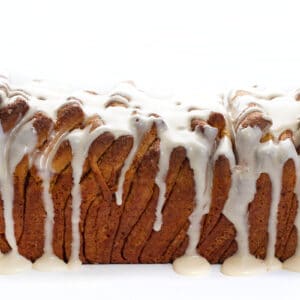