These donuts are absolutely going to melt in your mouth! Homemade donuts covered in a smooth glaze make up one of our favorite breakfast treats. If you love from-scratch recipes that have been perfected over many generations, don’t miss my Glazed Cake Donuts and  Apple Fritters!

There is nothing I like more than working with dough and creating beautiful and delicious baked goods for my family. This recipe is a labor of love, truly, and one that will most likely be saved for the most special of occasions! 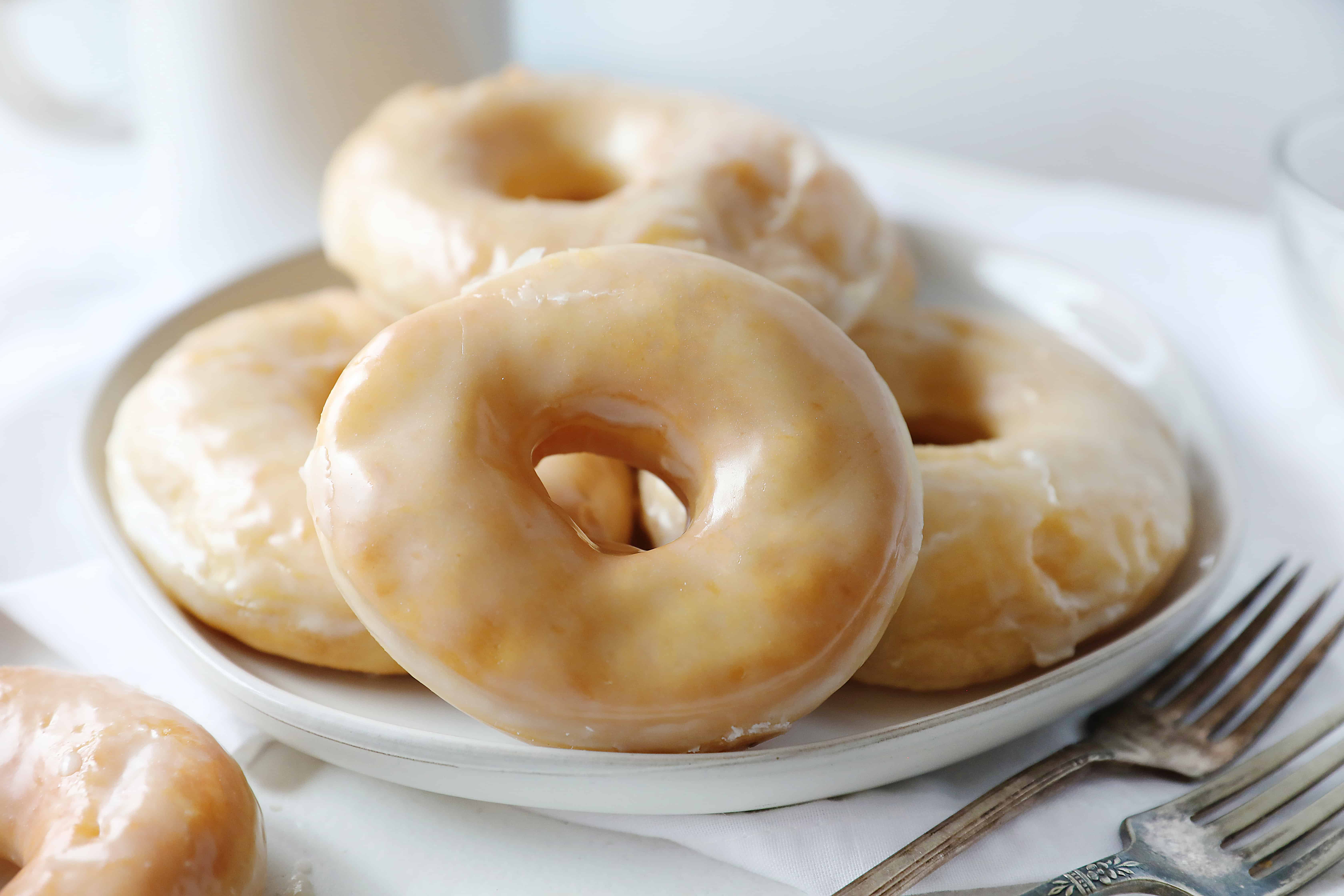 How to Make Amish Glazed Donuts

The original recipe I am sharing is called “Amish Glazed Donuts” and I found it in an old cookbook from a church in Pennsylvania. However, after extensive research on the topic, the Amish recipe doesn’t seem to vary greatly from traditional recipes. The main difference is the method, as most recipes seem to have the same basic ingredients:

This recipe was interesting to me as it utilizes two separated “wet” ingredients. You start by creating the milk mixture; milk, sugar, salt, and butter. You set that aside to cool a bit. Then the water mixture is started. That consists of the water, sugar, yeast. This needs to rise and bubble, indicating an active yeast. After those two are done, the dough can be made.

So while the steps seem daunting at first, they really are easy to do and the dough will come together quickly!

The other aspect to this method was the rising times. Yes, most recipes call for the dough to rise so that in itself is not unique. But one thing I had never done before was let the dough rise a bit after I have cut out the individual donuts, and I really appreciate that extra step! These donuts puffed up SO beautifully in the hot oil and stayed that way. Donut skip that part! 😉 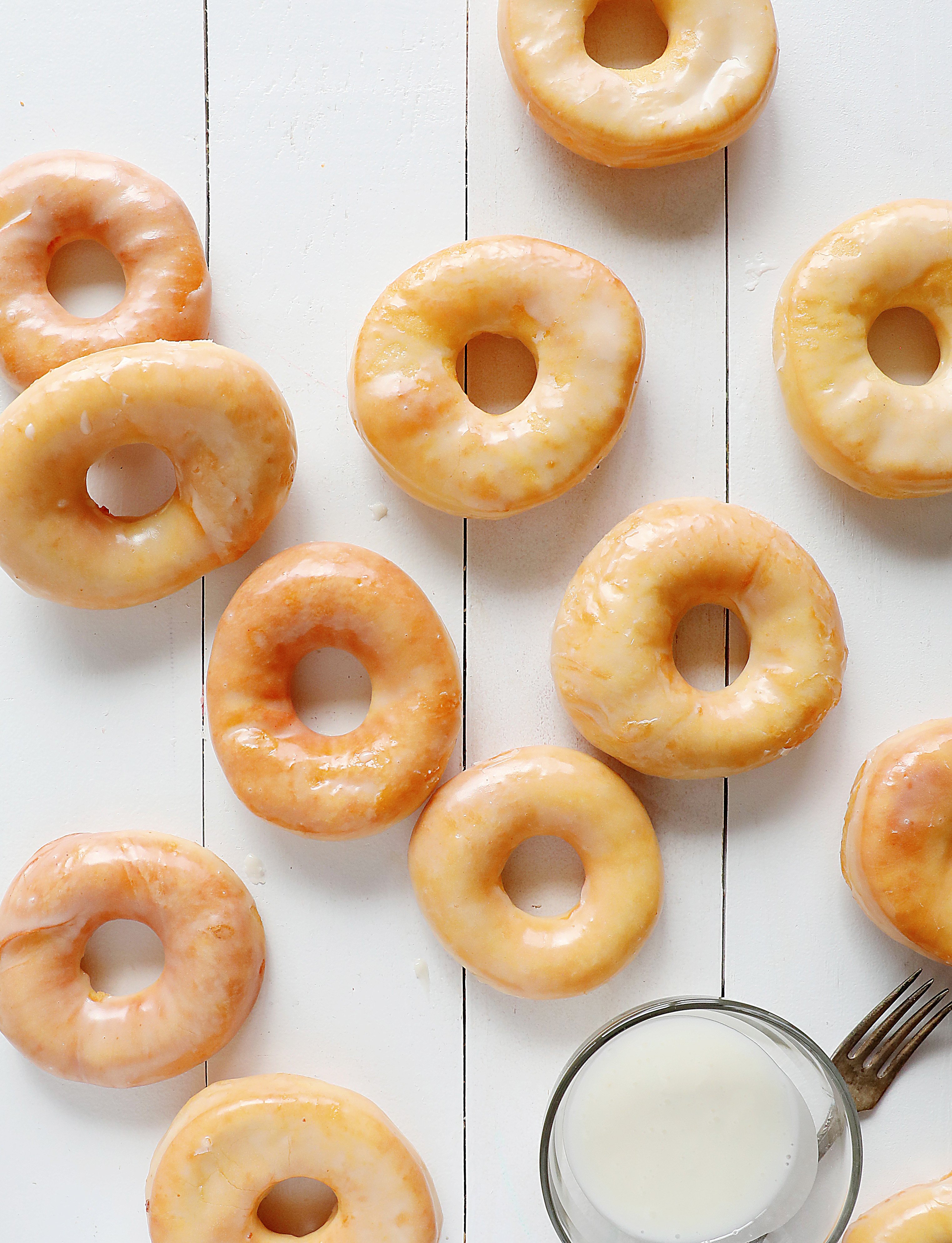 Dropping beautiful dough into a too-hot oil or a too-cold oil can do bad stuff to the beautiful dough that you have spent hours with. I found that the best way to ensure your oil stayed at a consistent 350°F was to have a thermometer right in the oil at all times. If you happen to have a pan large enough for frying 3-4 donuts at once, the addition of the dough can decrease the temperature significantly. If you see the temperature lower, you can immediately add heat and get it back up to temp. Requested info by a reader: I used a dutch oven with enough oil to reach 2inch deep. I don’t recommend adding more than that.

I found that when making glazed donuts it helped to have two people. One for frying and one for the glaze. To best prepare for this make sure you have these tools out and ready: 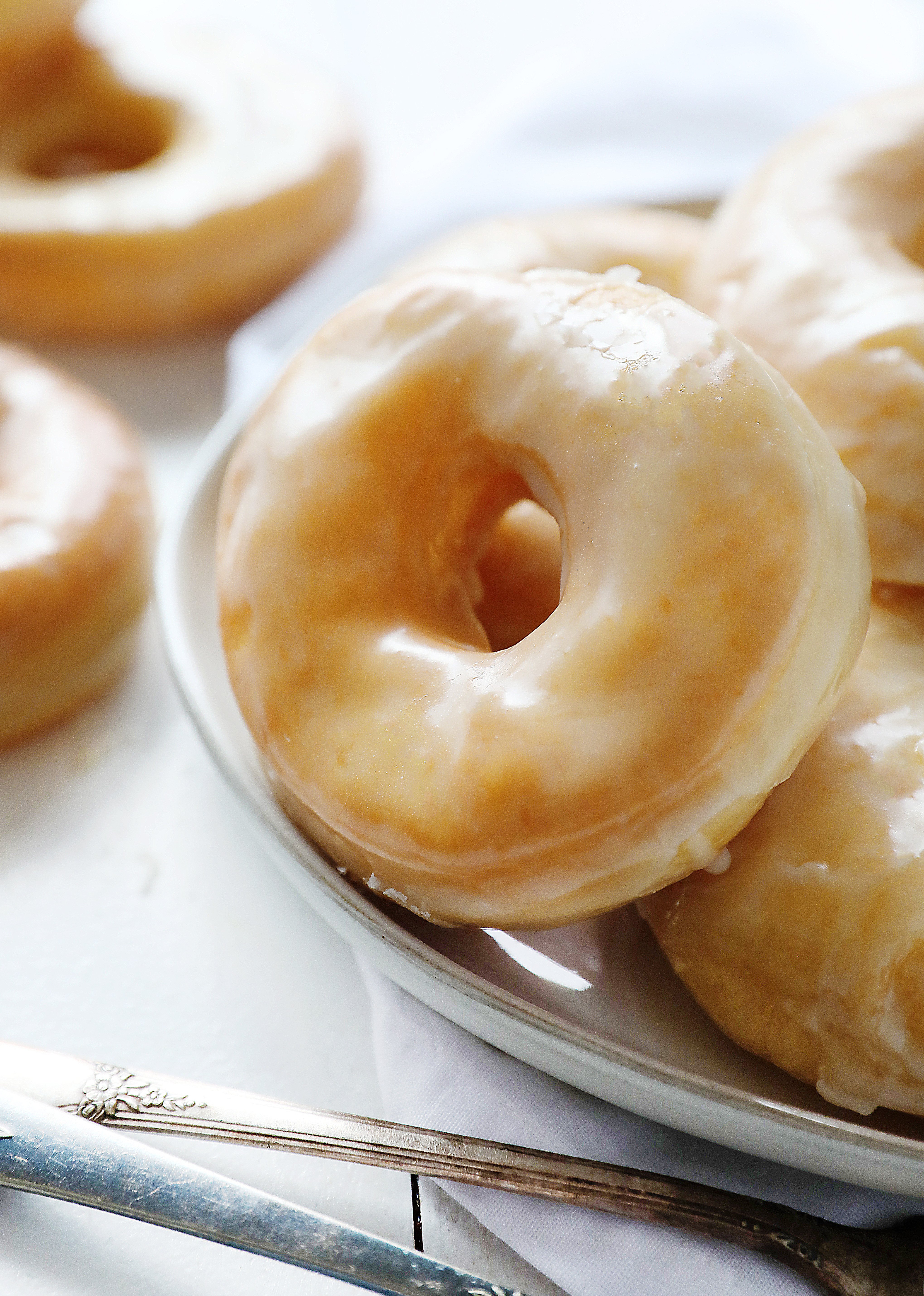 I prefer to glaze the donuts when they are still warm, yet cool enough to handle. To making the glazing easier, I used a bowl that was bigger than needed just to make sure I could easily drop and remove the hot donuts. Then, when I was ready to glaze, I set my bowl right next to a pan with a cooling rack in it. Drop an entire donut into the glaze and then flip it over. Using a fork or the handle of a wooden spoon, life the donut out by the center hole and let the excess glaze drip off. Place the donut on the cooling rack and allow to harden. 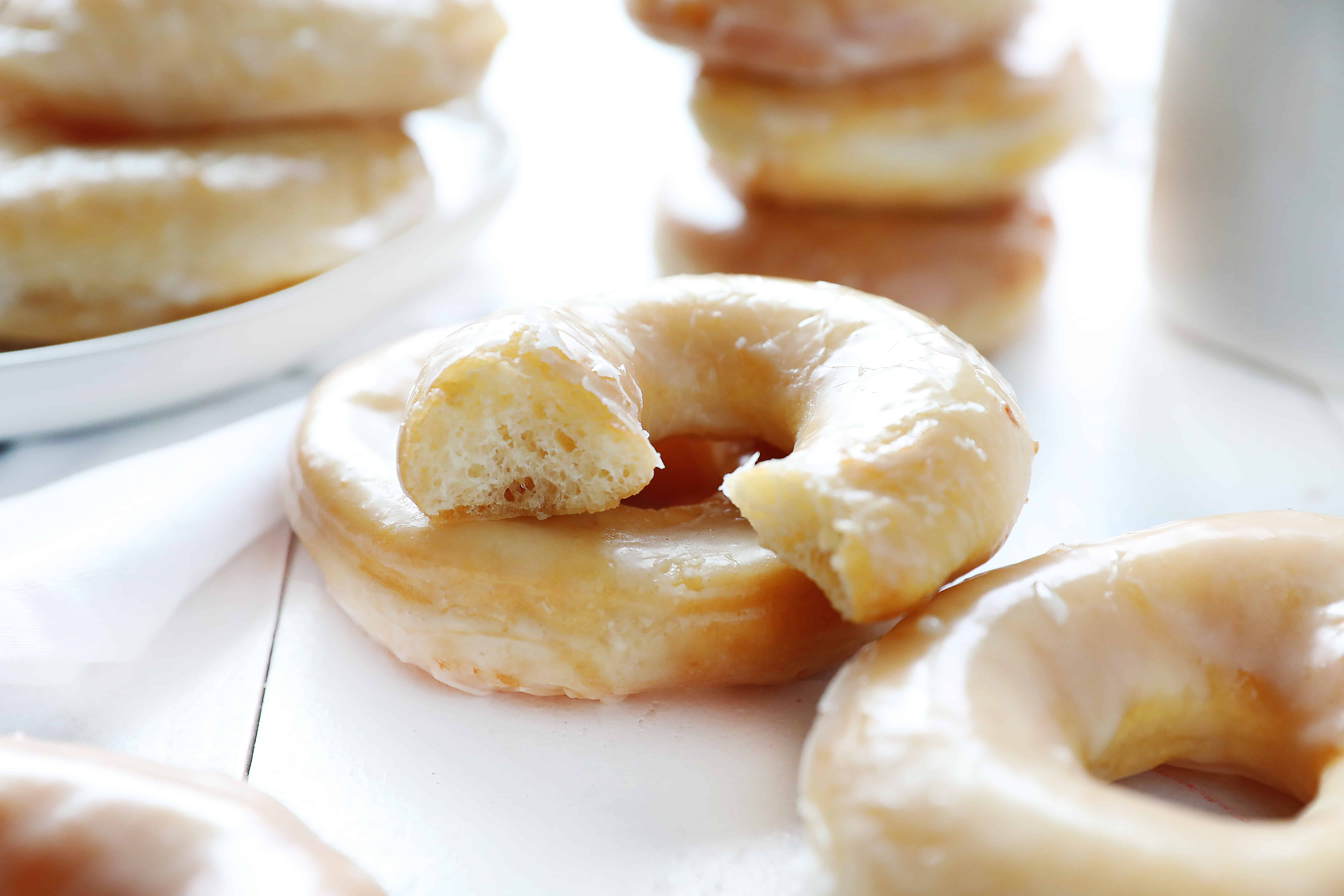 Making the glaze is easy as it’s just a few ingredients. Sugar, corn syrup, vanilla, salt, and milk. I don’t know about you, but whenever I see corn syrup added to a recipe I tend to want to leave it out. But for these donuts, it really does add something of value. I can say that because I made two versions of glaze, one with corn syrup and one without. We found that the donuts with corn syrup glaze were coated better, stayed soft and moist longer, and even tasted better. If you are adamant that you want to leave it out, I recommend using milk, confectioners sugar, salt, and a tiny bit of vanilla. The vanilla can be overpowering if you use too much and take away from the light-as-air taste of this donut recipe. If you use good quality vanilla like McCormick, you will not run into any issues. 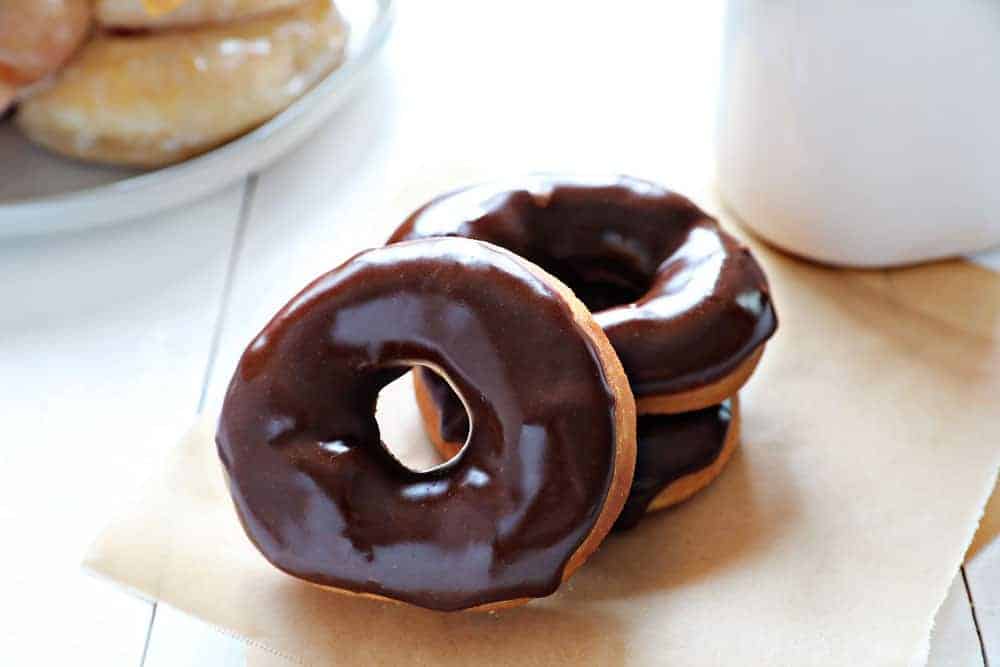 I tried out several different version of chocolate donut glaze and was disappointed by them all. It was a LONG day in the kitchen! Finally, after an hour of frustration with gloppy, lumpy, greasy, and gross tasting glazes, I added some cocoa powder to the glaze recipe below. It worked AMAZING!

Simply add 1/2 cup of cocoa powder to the recipe below and add any milk as needed. I added about 1 tablespoon more of milk (maybe 2 depending on the humidity in your area) and not only was the glaze shiny and beautiful, but it tasted great! 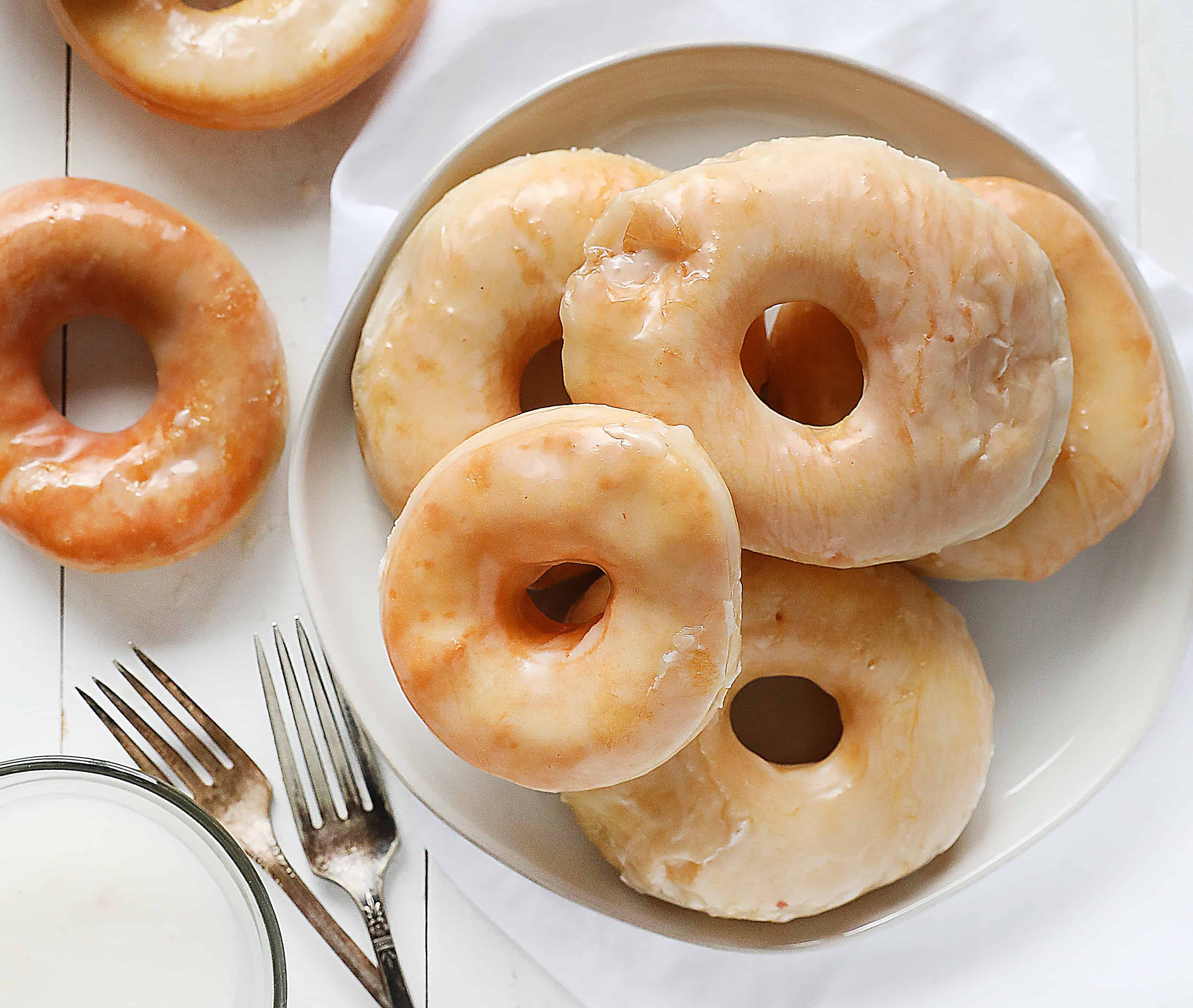 Can You Make the Dough Ahead of Time? 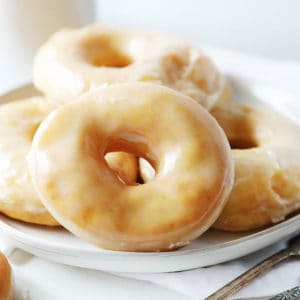 Please read the blog post for tips and tricks on how to make this recipe easier! Lots of information that can be helpful. 🙂