Rum Cake is a nutty yellow bundt cake made with dark rum, pecans, and topped with a rum glaze for a boozy dessert. Folks were so excited about my Mississippi Mudslide Cake, I knew adding another adult cake to the mix was a great idea!

If you don’t like rum, you may want to try my Cream Cheese Pound Cake or Kentucky Butter Bundt Cake instead of this cake. There is no denying there is rum in the cake, as well as in the glaze! In fact, there is quite a strong rum flavor in every bite. So, if you love rum, you will definitely love this delicious cake. 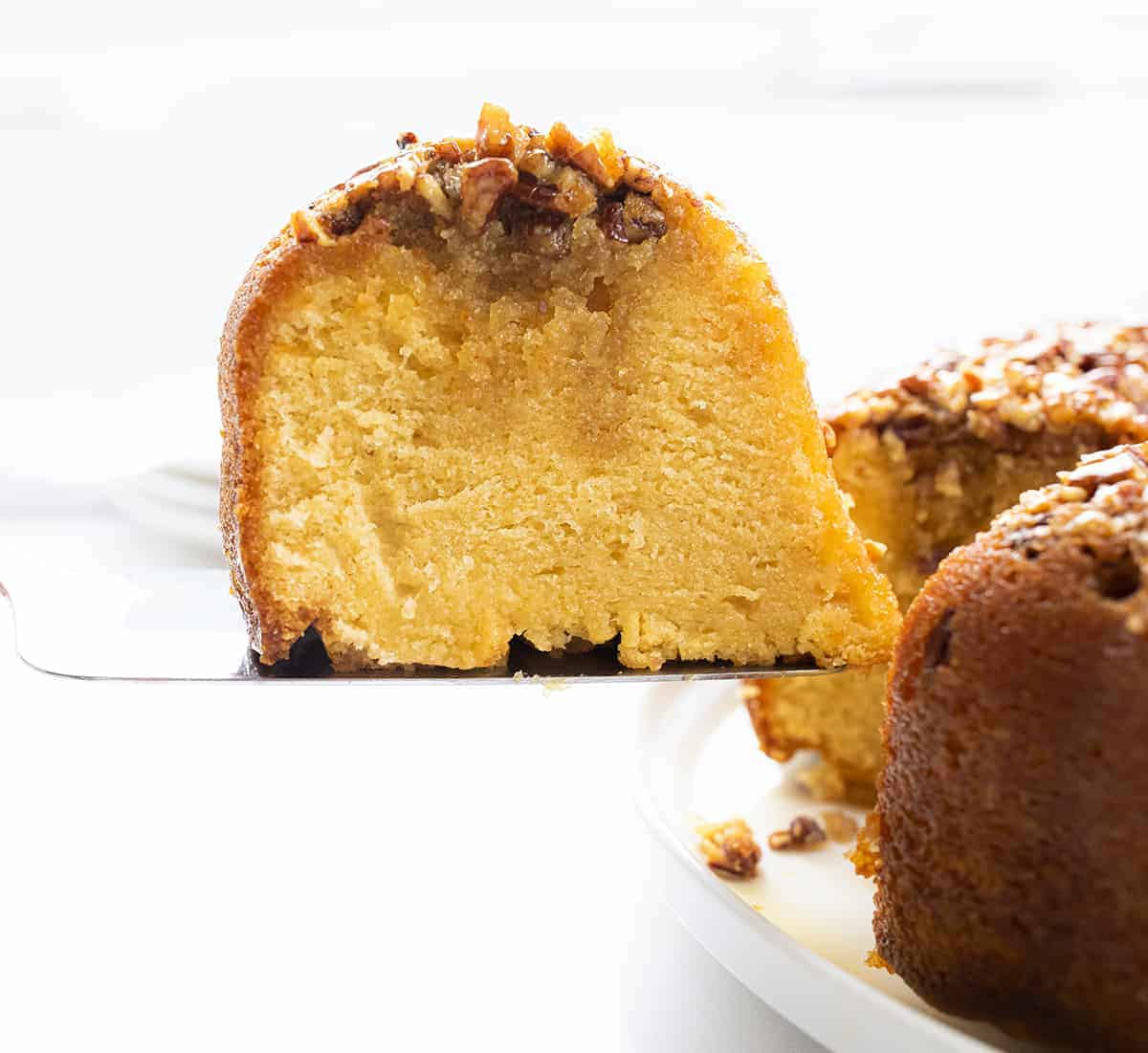 There are two parts to this recipe–the yellow rum cake and the rum glaze.

Nuts: I added chopped nuts to the cake, but you could leave out the nuts if preferred.

Pudding Mix: Look for a package of vanilla instant pudding mix (not cook and serve).

Flour: I used all-purpose flour in the cake; we have not tested this with other kinds of flour.

Rum: There is both dark and light rum. I used dark rum in this recipe, which gives it a darker color. The darker color comes from being aged in charred oak or wooden barrels before being filtered and bottled. Dark rum will give the cake more flavor; if light rum is all you have, you could use it, but the flavor may be altered a bit. 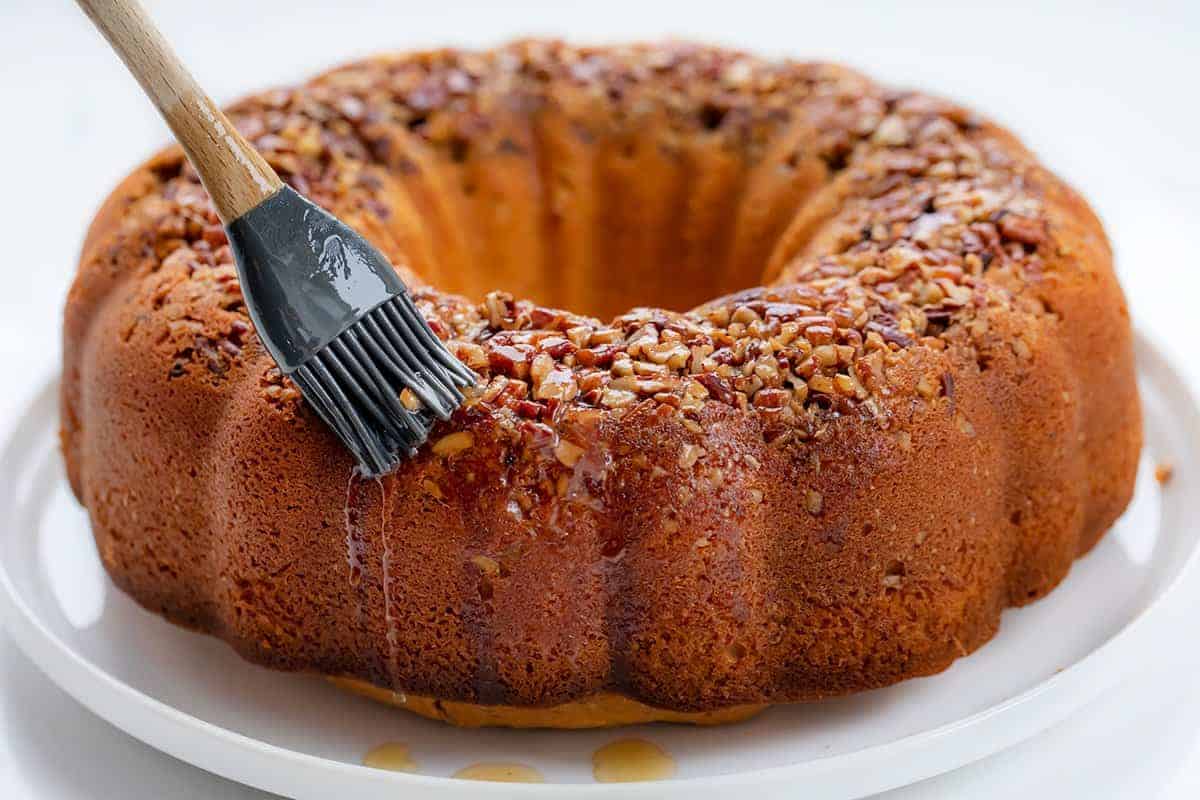 How to Make Rum Cake

This rum cake starts with a yellow cake that has rum added to the batter and made in a bundt pan. To make the cake, first, grease a 10-inch bundt pan with nonstick cooking spray and sprinkle the nuts over the bottom of the pan.

Next, in a mixing bowl, mix together the dry pudding mix, flour, sugar, baking powder, and salt. To the bowl of a stand mixer with a paddle attachment, add the butter and mix for 1-2 minutes. Then, add the dry ingredients to the butter and combine for about 30 seconds.

Add the oil, vanilla, and eggs, one at a time, and mix for about a minute. Finally, stir in the rum and mix until combined. Pour the batter over the nuts in the bundt pan. Spread the batter into an even layer and bake the cake for 55-60 minutes, or until a toothpick comes out clean or with a few crumbs (but no wet batter). Remove the cake from the oven and let it rest for about ten minutes before inverting it onto a large plate. 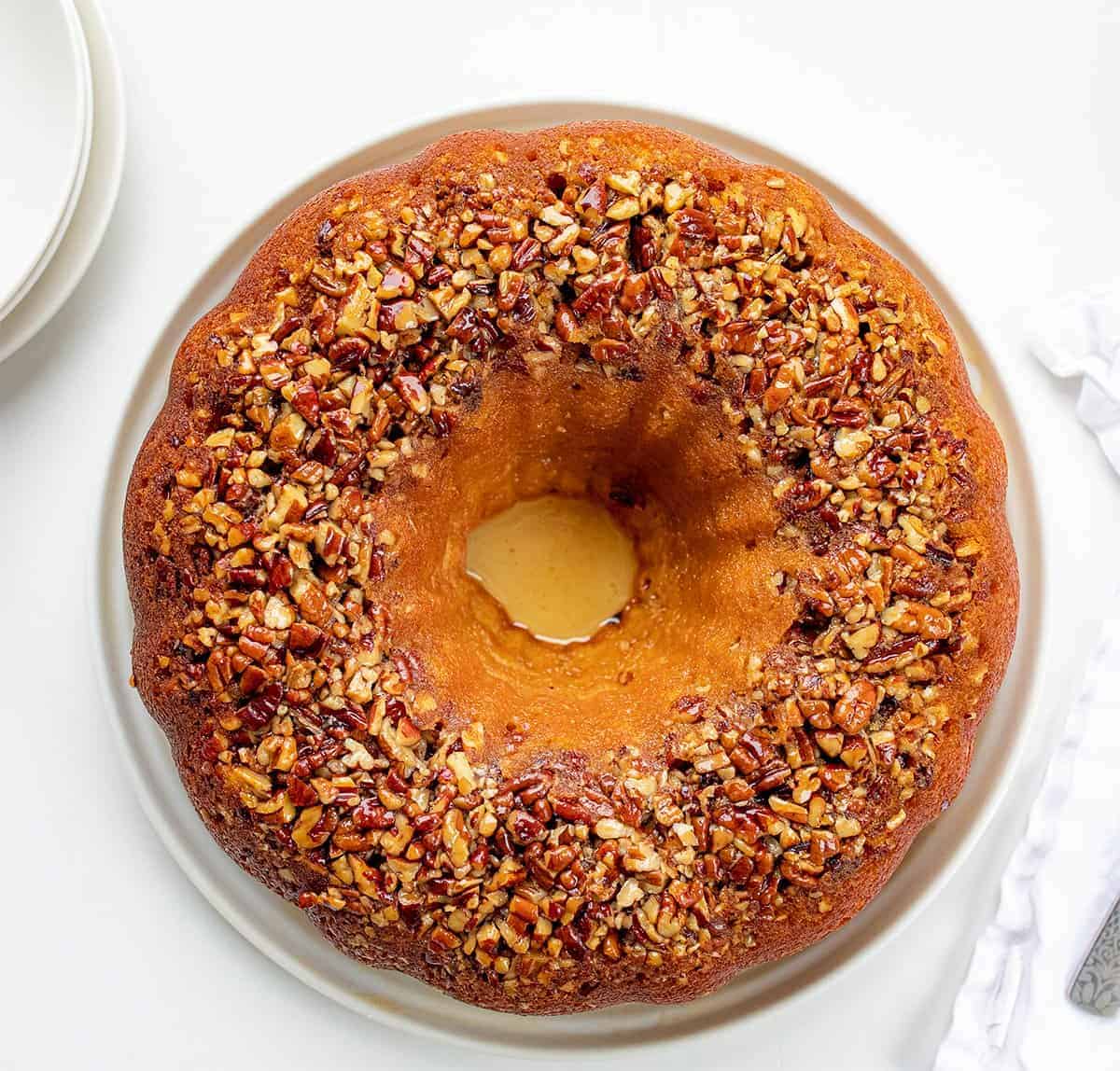 Yes, there is more rum in the glaze! Cheers to that! To make the glaze, add butter, water, and sugar to a medium saucepan. Over medium heat, bring the mixture to a simmer. Stir for 2-3 minutes, or until the sugar has dissolved.

Can I Make This Cake Without Rum?

Well, not really. It is, after all, called a rum cake for a reason. However, one way to reduce the amount of rum in the recipe is to use simple syrup to top the cake rather than the rum glaze. That would tone down the rum flavor a bit. 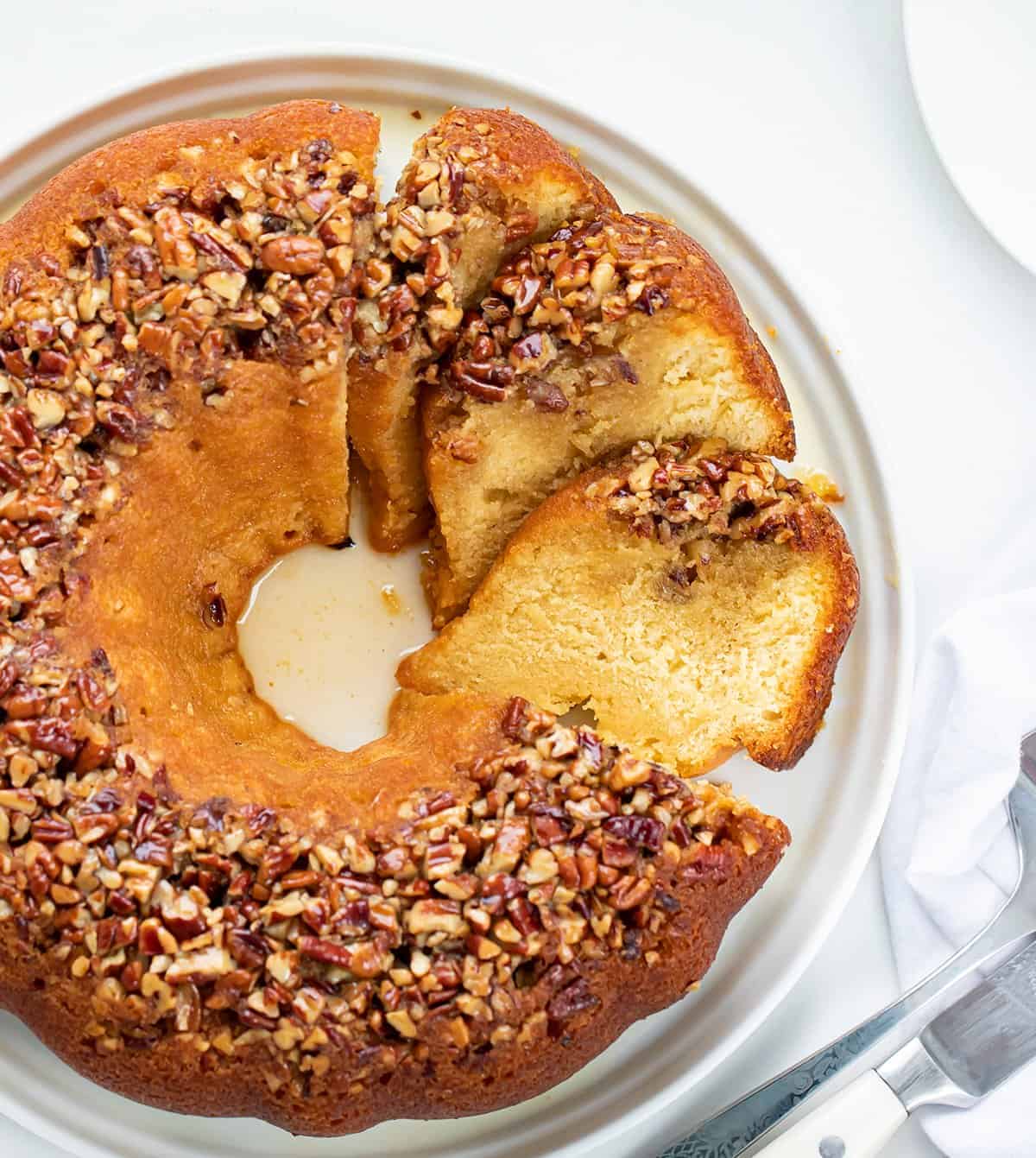 What is the Difference Between a Bundt Cake and a Regular Cake?

This may seem like a question that is a no-brainer. The difference between a bundt cake and a regular cake is that a bundt cake is baked in a bundt pan (also known as a fluted tube pan)! Well, that is true, and part of the answer, but not the entire answer.

Another difference is the bundt pans have a cylindrical hole in the middle, which means more of the cake will touch the sides of the pan. This results in a crustier edge. This isn’t a bad thing; it is perfect for supporting any frosting or decorating you may add to the cake.

The hole in the center of a bundt pan can also cause a drier cake since it is more exposed to the heat in the oven. To prevent this, be sure to use full-fat ingredients in the batter. This will keep the cake moist, which is what you want in a pound cake or any other dense, moist cake that is made in a bundt pan!

What Size Bundt Pan Should I Use?

Size does matter when it comes to making bundt cakes. I used a 10-inch bundt pan that holds 12 cups of liquid. Generally, the size of bundt pans is determined by how many cups of liquid it holds. When adding the batter, just be sure to not add too much of it or it will overflow in the oven. A good tip would be to fill the pan about 2/3 of the way full. And, if possible, use a light, nonstick metal pan for best results. 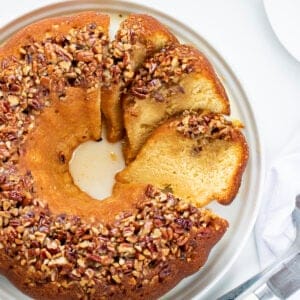 Rum Cake is a nutty yellow bundt cake made with dark rum, pecans, and topped with a rum glaze for a boozy dessert.