Chocolate Chip Cookie Cheesecake Brownies are layered dessert bars with a brownie layer topped with cheesecake and chocolate chip cookies! They are rich, creamy, and a fantastic flavor mashup! Try my Brownie Bottom Cheesecake for another layered brownie dessert.

These dessert bars are a triple threat, or should I say a triple treat with three delicious sweet treats layered into one decadent dessert! It starts with a layer of fudgy brownies from my French Silk Brownies. Then, the brownies are topped with a cheesecake layer and chocolate chip cookies from my Chocolate Chip Caramel Bars.

There are three parts to these triple-layer brownies–brownies, cheesecake, and chocolate chip cookies.

Cocoa: Use Dutch-process cocoa in the brownies. It gives them a richer taste, a darker appearance, and a more velvety texture. And, the quality of the cocoa does matter.

Bake the brownies for 30-35 minutes, or until the cheesecake has set. Remove the brownies from the oven and let them come to room temperature. Finally, transfer the pan of brownies to the refrigerator to chill for 4 hours, up to overnight. 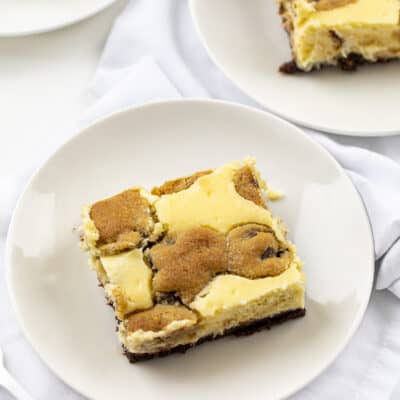