This Zucchini Crisp is “faux” apple crisp. By cooking the zucchini a certain way with specific ingredients I was able to transform the zucchini into a dessert that tastes just like Apple Crisp! It’s a magical dessert that we make every summer when we have an abundance of zucchini! 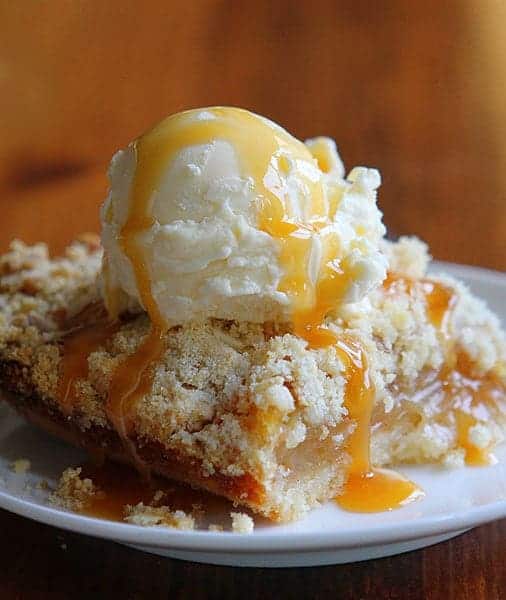 This, my sweet friends, is Zucchini Crisp. It tastes exactly, and I do mean exactly, like Apple Crisp.

Only better. Cause it’s zucchini and we all know I am a wee bit obsessed with it. 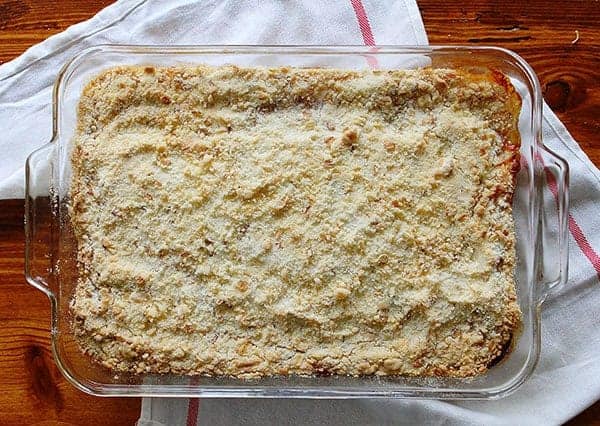 My husband came home one day and was like, “So I was chatting with the guys at work and one of them mentioned having a really delicious zucchini crisp.”

Um, what’s this you say?  You can your buddies sit around talking about yummy baked goods?

Well, no.  Hubby sometimes brings our extra zucchini to work and someone was thankful and offered up recipe ideas. So, uh, basically, yeah.  The boys do talk baking at the office.

Which makes me gloriously happy.  I now call him Mr. iambaker.

Anywho, after all that, I was like, “Where is the recipe?”

“He doesn’t have a recipe.  He just ate a zucchini crisp he liked.” 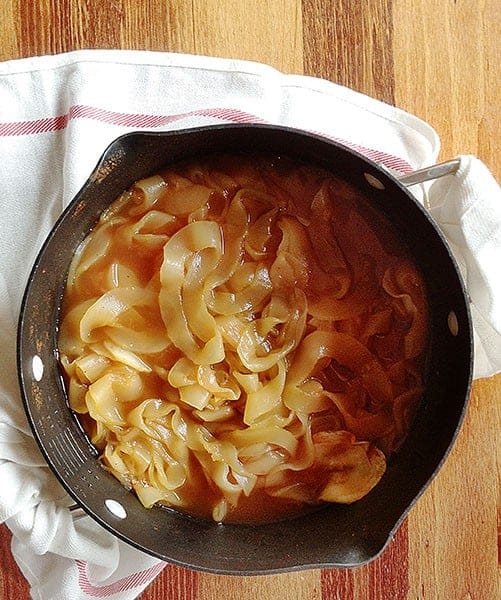 After doing some hunting online I was able to find a recipe, but I found it to be pretty vague. So through trial and error, I have now found the best possible recipe for Zucchini  Crisp.

It’s foolproof I tell you! 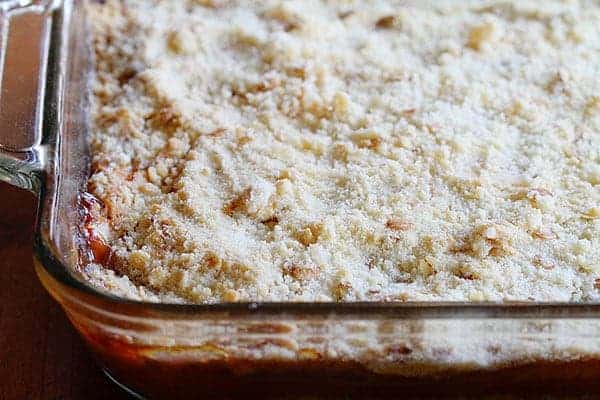 How to Make Zucchini Crisp

I would advise using the mandolin for slicing the zucchini.  If you do not have one and need to cut by hand, make sure to take the time and get really uniform slices.

Before cutting in the butter I dice it into small pieces. This works great when you opt to use your hands to mix like I do! 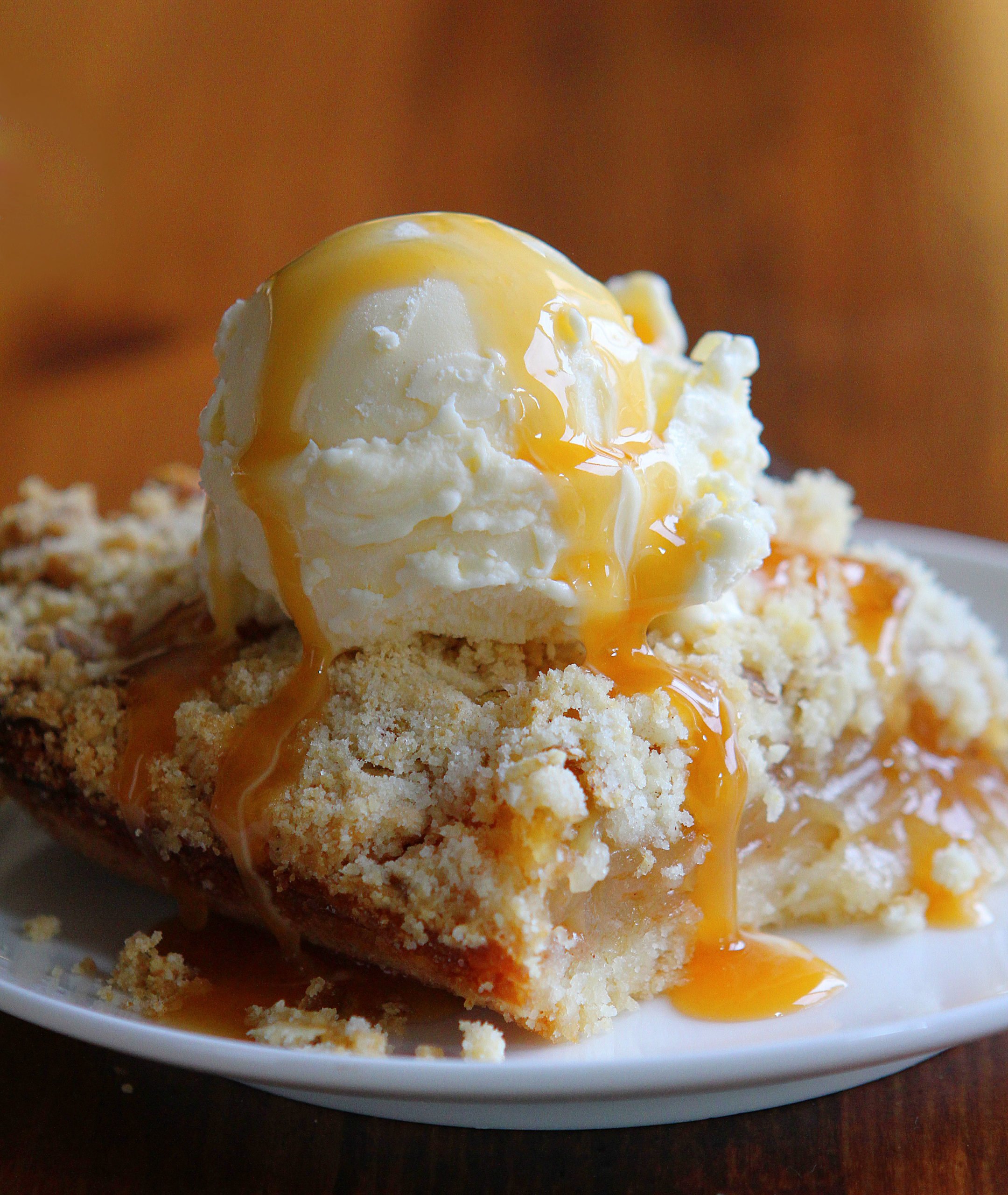 I am not kidding, this tastes so much like apple that no one would ever know it is a zucchini!

Served warm is the best option, and serving with vanilla ice cream and caramel is an even better option. 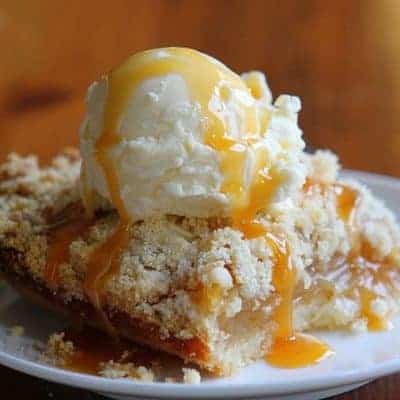 *The easiest way to remove the seeds when using a mandolin is to cut the zucchini in half lengthwise then scoop out the seeds with a spoon. After all the seeds are removed, the zucchini should look like a large piece of celery.
Course: Dessert
Keyword: zucchini crisp
Servings: 12
Author: Amanda Rettke 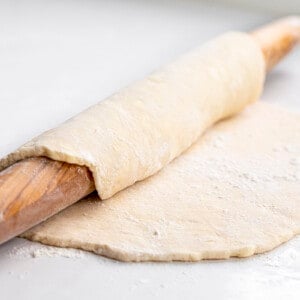