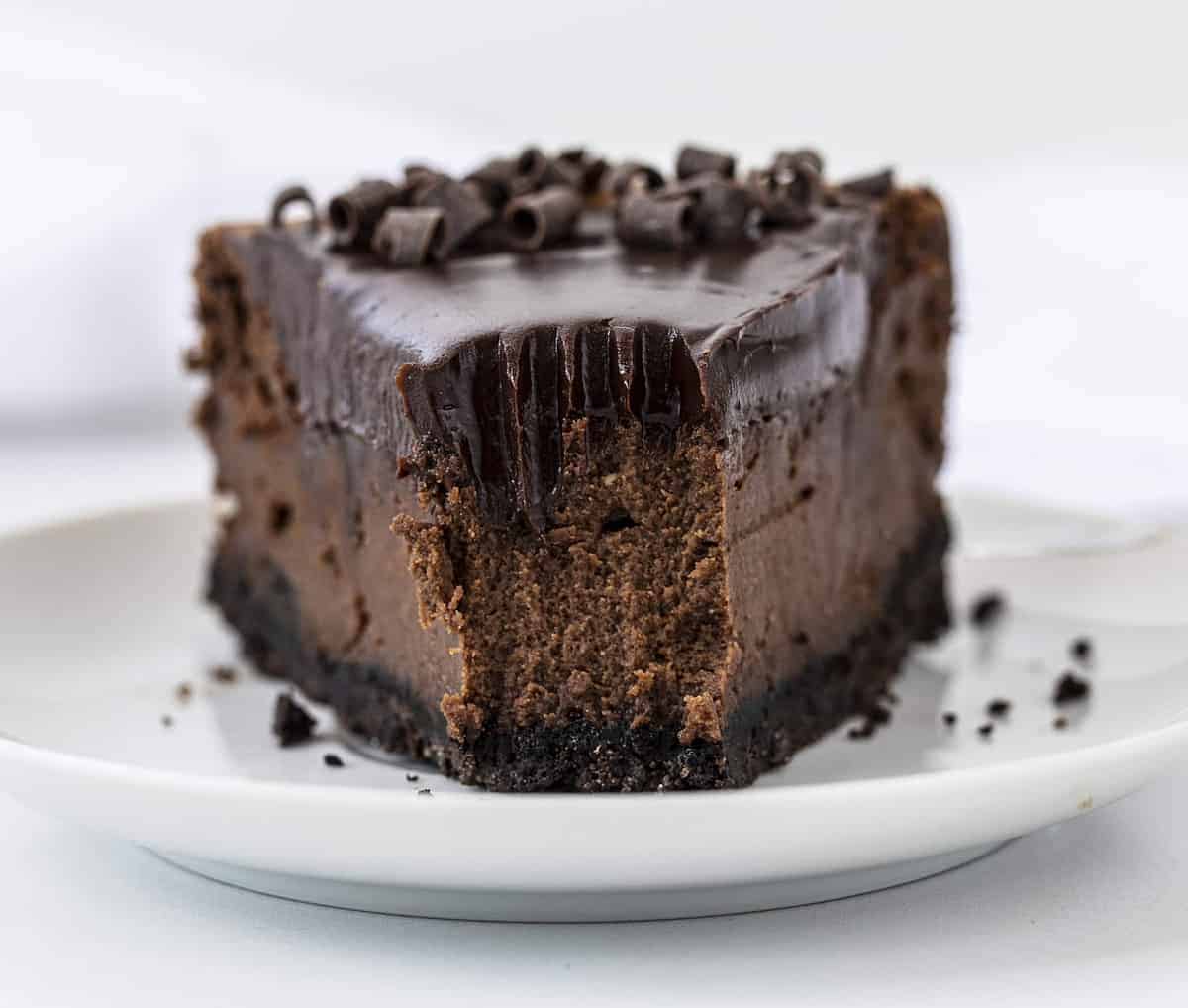 There are three chocolatey parts to this recipe–the oreo cookie crust, the chocolate cheesecake filling, and the chocolate ganache. The filling is the star, of course! 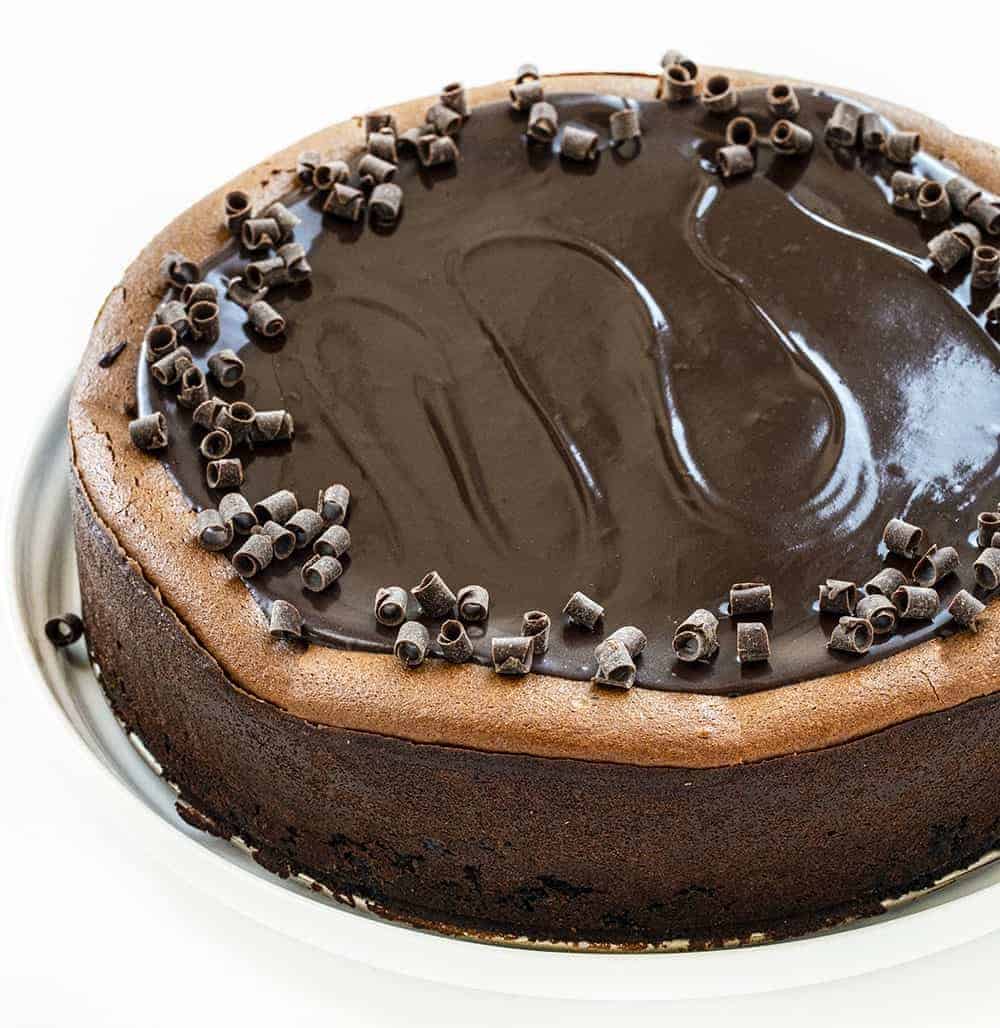 Chocolate Cheesecake is as easy to make as it is delicious! It starts with the crust. I used Oreo cookies for this Chocolate Cheesecake. Melted butter and crushed Oreo cookies are the only two ingredients you need! Make sure you crush the cookies (cream filling and all) as best you can before adding the butter. I used a food processor to get very fine crumbs, but you could also put them in a zipped plastic bag and use a rolling pin to crush the cookies.

When mixing together the ingredients, use a fork to make sure every single cookie crumb is coated in the melted butter. The butter acts as the binding agent. When you see cheesecake recipes that have piles of crust left on the plate, it is usually because they were not coated with butter. Press the crust into the bottom and up the sides of a greased 9-inch springform pan. Bake the crust for 10 minutes at 325°F.

A springform pan is a good choice for any cheesecake recipe because it has removable sides. You won’t have to mess up your dessert by trying to get the cheesecake out of the pan! If you do not have a springform pan, I recommend using a disposable pan that you can cut off after your cheesecake is done.

A second option if you don’t have a springform pan would be to line a pan with parchment paper, leaving plenty of the paper hanging over the side. With some help, you and your extra set of hands can carefully lift the cheesecake out of the pan. 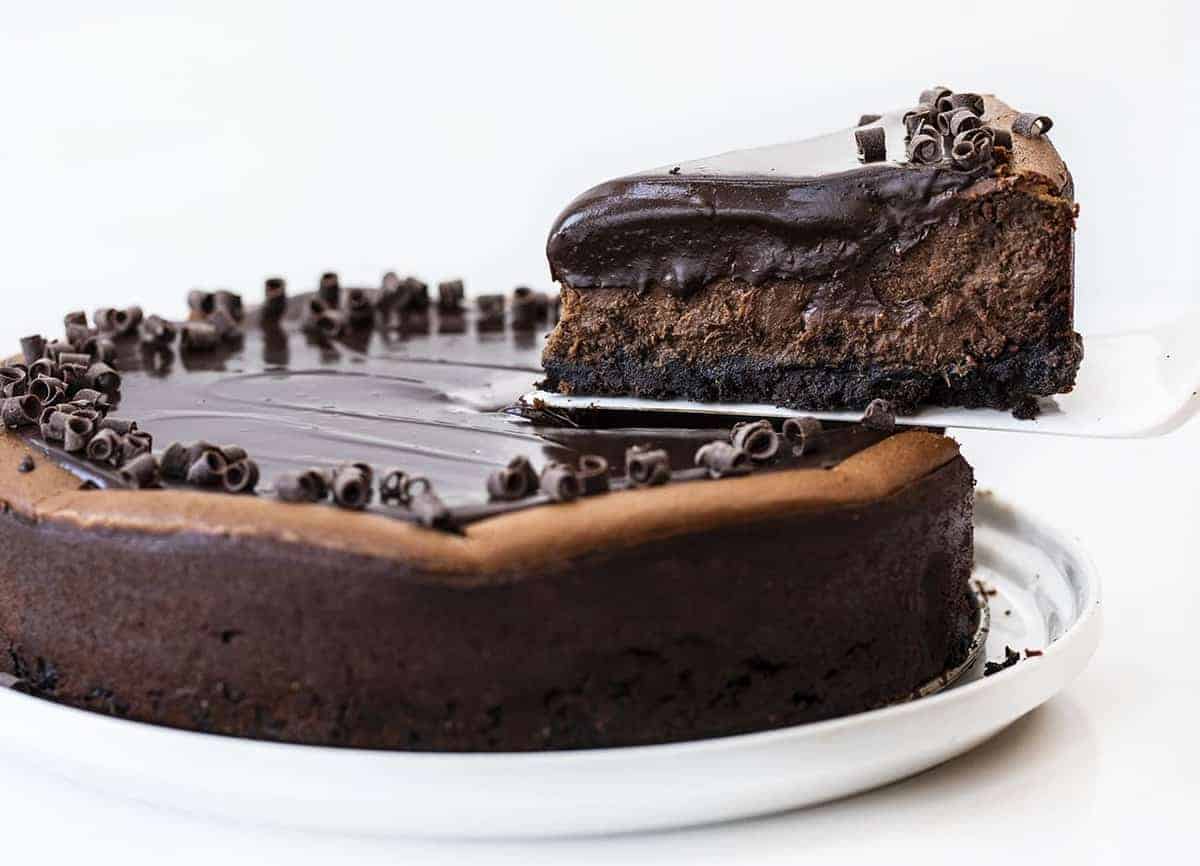 How to Make the Chocolate Cheesecake Filling

In a large bowl, add the cream cheese and use a hand mixer to beat until smooth and creamy. Beat in the sugar and cocoa powder until smooth. Add the eggs, one at a time, beating well after each added egg. Pour in the remaining heavy cream, mixing until combined. Finally, fold in the chocolate mixture and add the vanilla, stirring until combined.

How to Bake Chocolate Cheesecake

After you have made the filling, pour that on top of the Oreo crust that is lining the springform pan. Bake the cheesecake for about 70 minutes, making sure to place a pan underneath the springform pan to catch any dripping butter. You will know the cheesecake is done when the sides are set, but the middle is still a bit jiggly. You can check the internal temperature of the cheesecake to check for doneness (150°F), but who wants holes in their beautiful cake?

The other option to check for doneness would be to take a wooden spoon and tap the outside of the pan. If there is a slight jiggle, it’s done! Remove the cheesecake from the oven and let it rest until the pan is cooled. Chill it in the refrigerator for at least four hours. 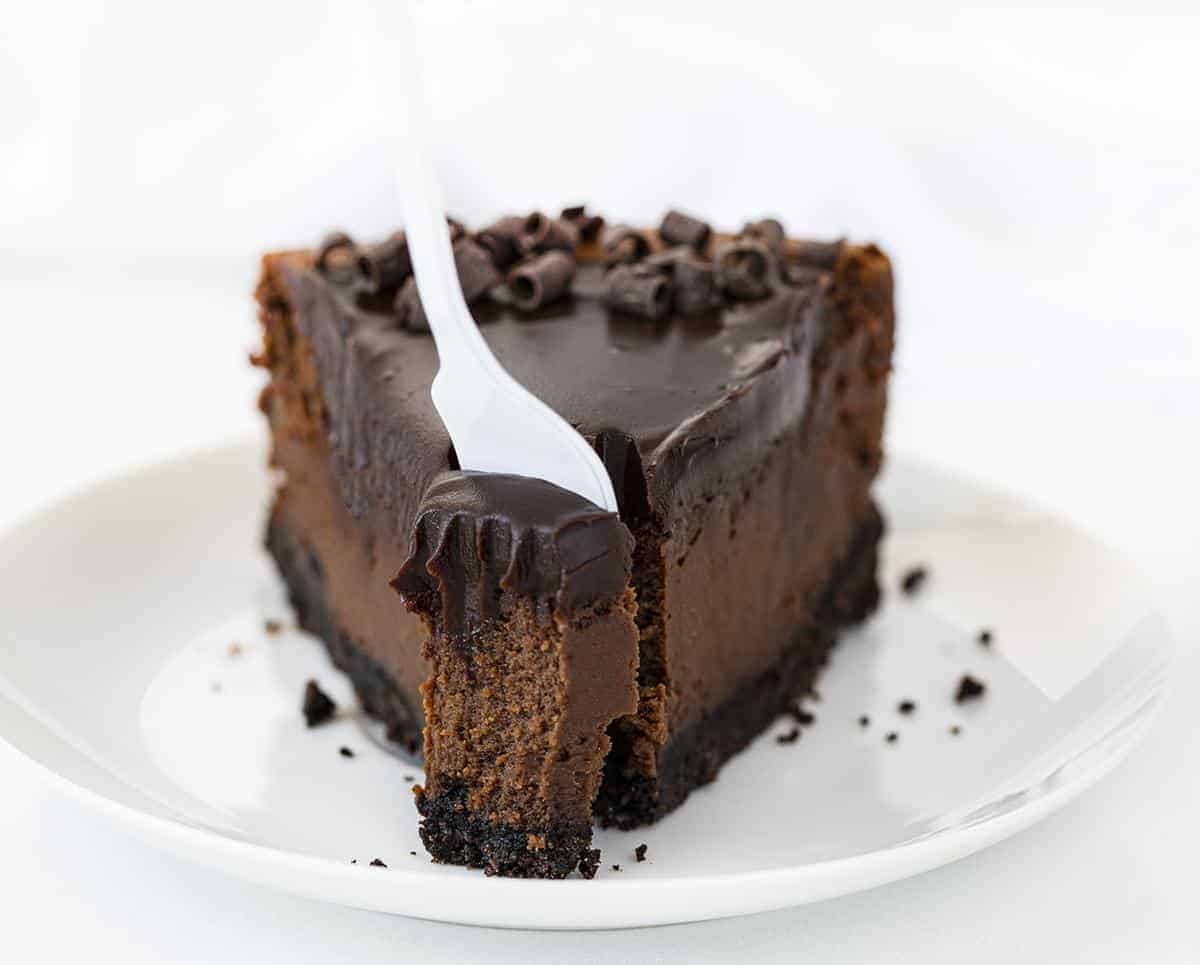 How to Make the Chocolate Ganache

How to Store Chocolate Cheesecake 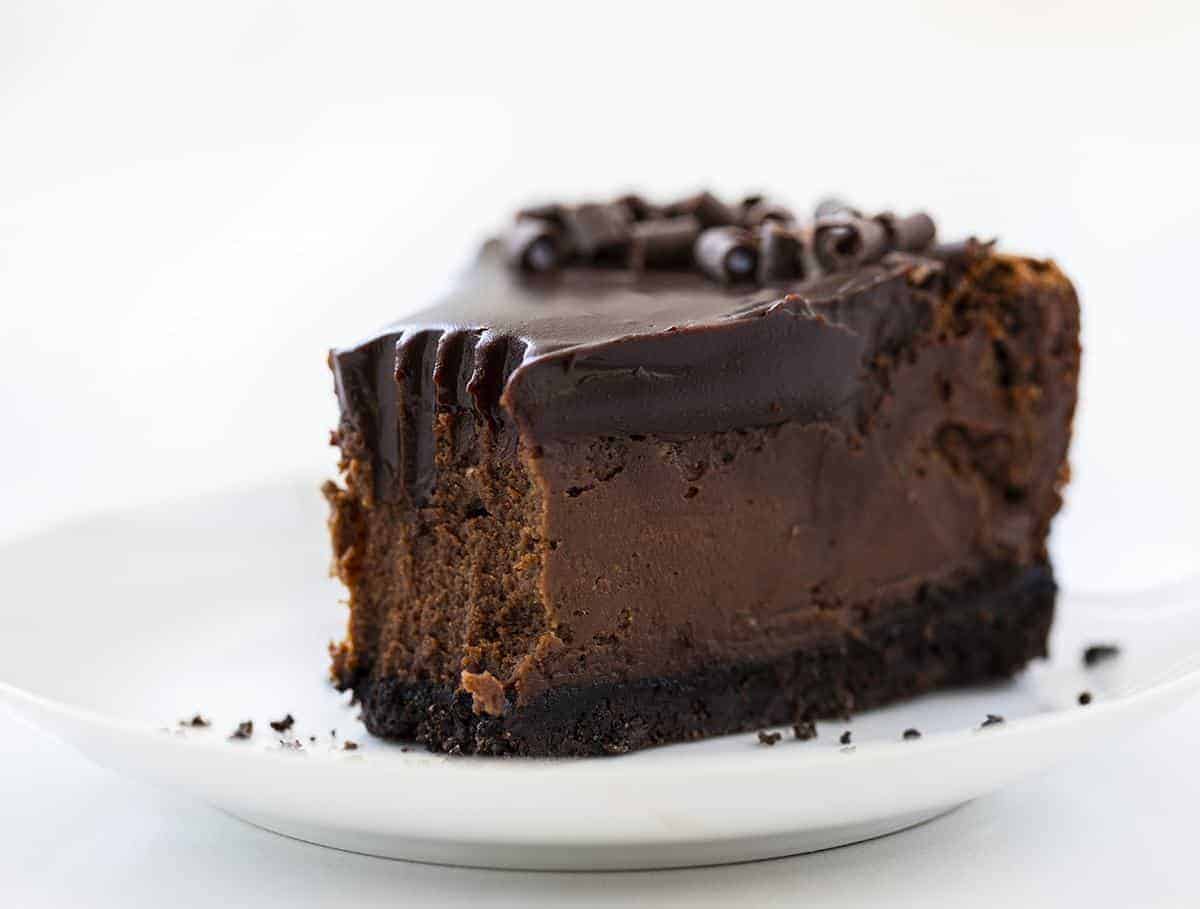 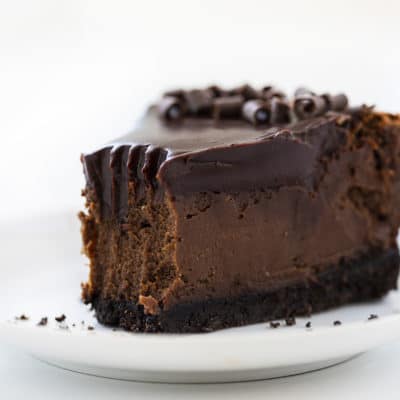