Cinnamon Shortbread Bars start with a soft and crumbly buttery shortbread cookie with added cinnamon and a chocolate ganache on top. Be sure to check out my Millionaire’s Bars recipe for another layered shortbread cookie treat.

It all starts with the buttery, crumbly shortbread cookie in this recipe. Then, I added a little bit of cinnamon to the mix for a touch of cinnamon flavor in the Scottish biscuit. Finally, the cinnamon shortbread is topped with a shiny and smooth chocolate ganache. 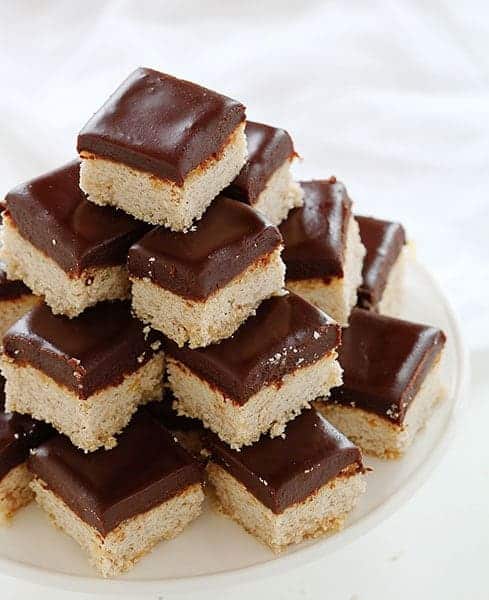 This recipe is composed of two parts–the cinnamon shortbread and chocolate ganache.

Butter: 2 sticks are just the right amount of butter to keep the cookie dough held together, but not too much to cause the cookies to lose shape in the oven. The butter should be cold.

Cornstarch: Using 1/4 cup of cornstarch kept the cookies together, but still soft. You could also use 1/4 cup rice flour in place of cornstarch.

Cinnamon: The cinnamon adds just a touch of flavor to the simple ingredients of this more traditional shortbread recipe.

Salt: Yes, it’s a little amount of salt, but it makes a big difference in flavor, so don’t leave it out!

Heavy Whipping Cream: Heavy whipping cream, or heavy cream, is a liquid that is 36-40% fat.

Chocolate: I used semi-sweet chocolate morsels for the ganache to keep it from being too sweet. 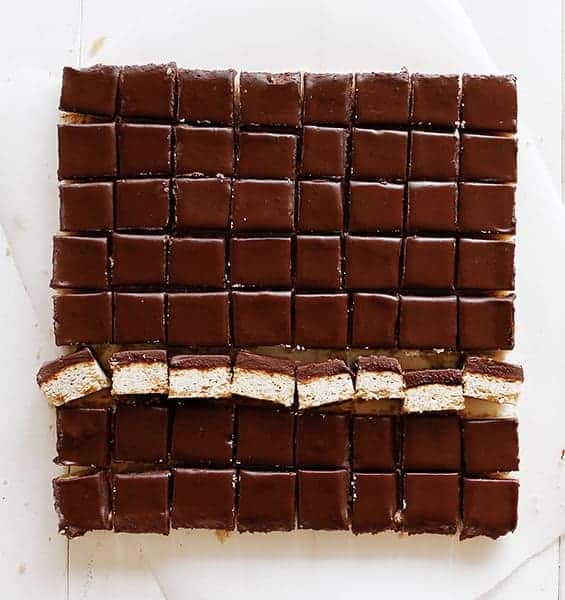 How to Make Cinnamon Shortbread Bars

This cinnamon shortbread bars recipe is one of the very few times that I will have you use cold butter. Keep it cold until you are ready to cut it into cubes. To get started, combine the flour, corn starch, sugar, cinnamon, and salt in the bowl of a stand mixer with a paddle attachment. (You could also get away with a handheld electric mixer.)

Next, cut the cold butter into 1/2-inch cubes, working quickly to keep it cold. Place the butter in a small bowl and add 1/4 cup of the flour mixture to the bowl, coating the cubes of butter. Pour the floured butter (as well as any extra flour mixture) back into the bowl of the stand mixer. Mix on low for about 4 minutes. Remove the bowl from the stand mixer and use your hands to toss the ingredients together, rubbing in any butter bits.

Press the shortbread mixture firmly and evenly into a 9×9-inch pan lined with parchment paper, smoothing the mixture with the back of a spoon. Pierce the dough with a fork in one-inch intervals. Bake the shortbread at 350°F for 35-40 minutes, or until the top and edges are lightly golden brown. Remove the shortbread from the oven, and, while the crust is hot, press it down with a spatula. Set it aside to cool as you prepare the chocolate ganache. 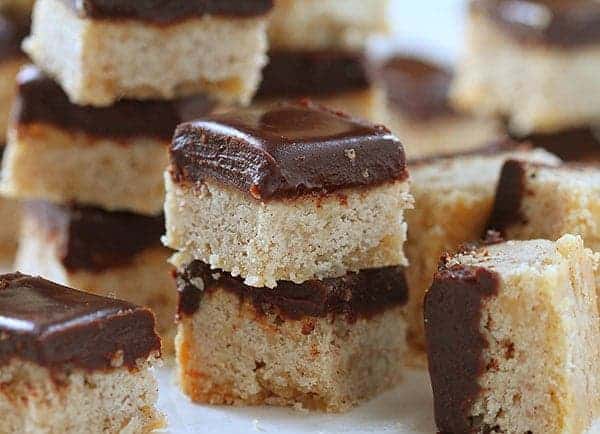 As the cinnamon shortbread is cooling, make the chocolate ganache that will be spread over the top. Yes, the shortbread is delicious on its own, but the added chocolate adds just the right amount of sweetness, and chocolate, of course!

To make the ganache, first, place the heavy whipping cream in a microwave-safe bowl and heat for about two minutes, or until the cream is just boiling. Next, carefully add the chocolate morsels into the cream. It may bubble up a bit, but that is fine. Let the mixture sit for about 5 minutes before whisking the mixture together until it is smooth and shiny.

You may boil the cream on the stovetop if you prefer. But, instead of adding the chocolate morsels to the saucepan, pour the boiling cream over the chocolate that is in a heat-safe bowl.

Finally, spread the ganache evenly over the cooled shortbread with an offset spatula. Let the bars chill in the refrigerator for at least 4 hours before cutting and serving. Store the bars in an air-tight container, in the refrigerator, for up to a week. 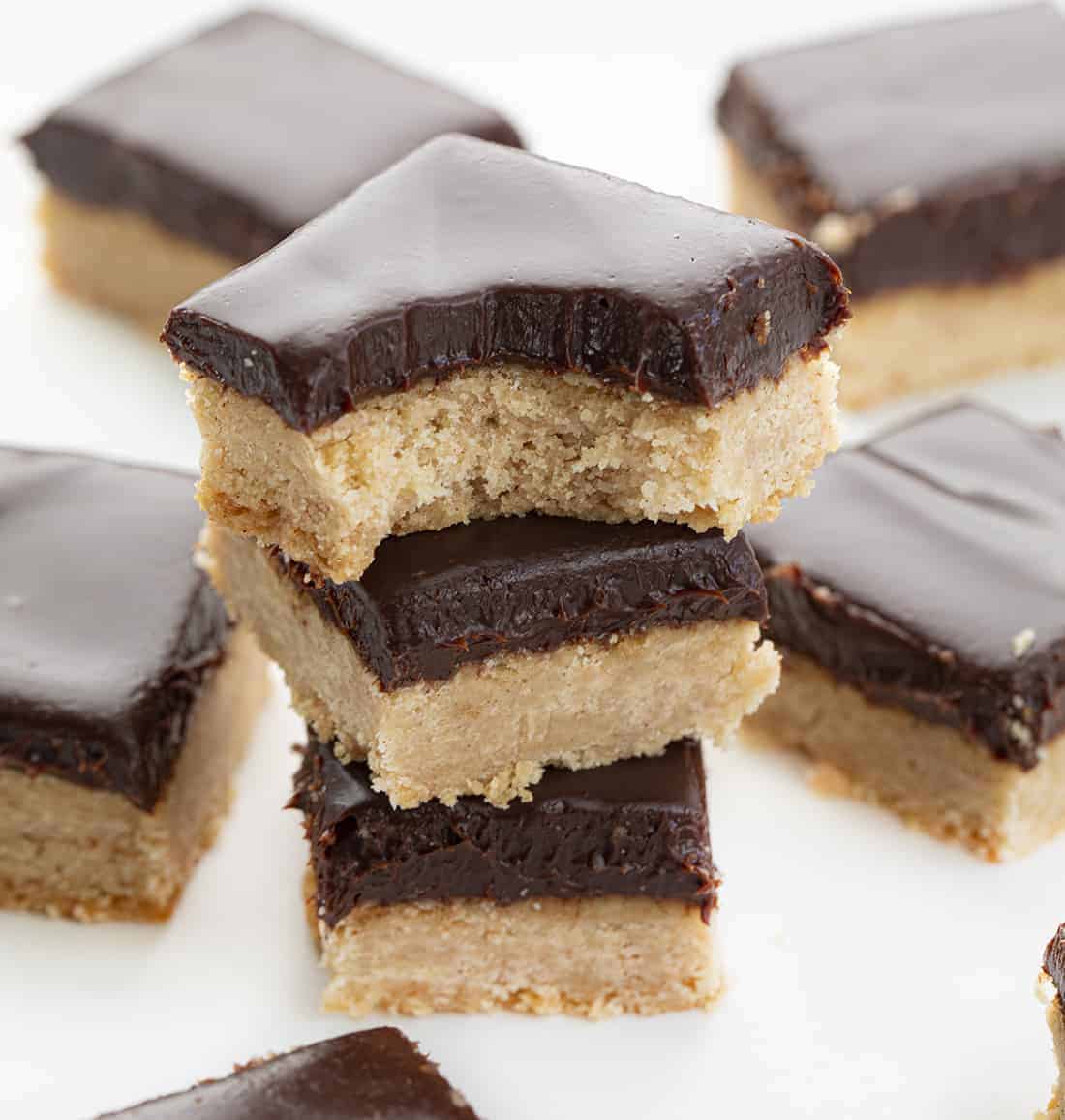 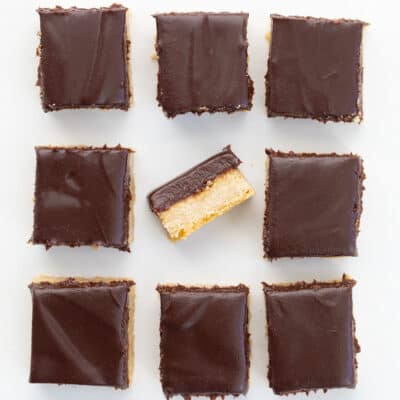 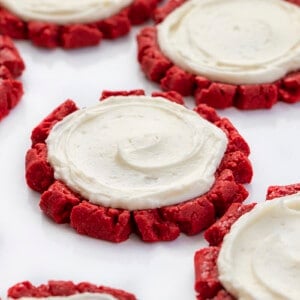 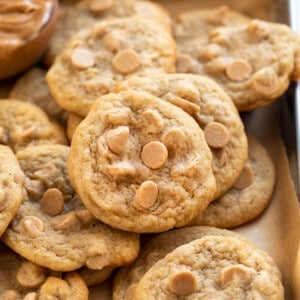 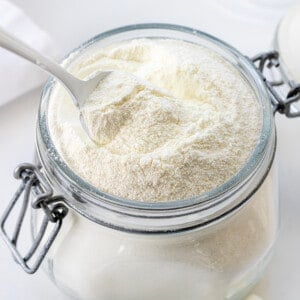 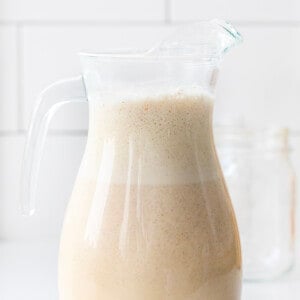