Homemade Marshmallow Fluff is a sweet and gooey spreadable concoction that tastes like marshmallows. Use this in my Booty Dip and Mallow Sauce recipes!

Marshmallow Fluff, or Marshmallow Creme, is not even made with marshmallows, but it has a similar flavor. It’s a paste that is perfect for sweet treats and desserts like Frozen S’mores, Oatmeal Cream Pies, and Fruit Dip, just to name a few.

There are two parts to this recipe–the syrup mixture and the egg mixture.

Corn Syrup: Corn syrup is processed from cornstarch. Use light corn syrup in this recipe as a natural sweetener.

Eggs: Only egg whites from 3 large eggs are needed. Make sure they are at room temperature.

What is Marshmallow Fluff?

Why Are My Egg Whites Not Setting Up?

Yes, you are aiming for soft peaks, but the egg whites still need to be set up a bit. Here are some tips to make sure your peaks are perfect!

You may think this recipe is the same as the well-known 7-Minute Frosting or White Mountain Frosting. It isn’t. While they are similar, they are also very different.

Homemade Marshmallow Fluff is significantly thicker and more stable than frosting. The corn syrup mixture is heated to 240°F in marshmallow fluff. The addition of this heat is what creates more stability in the homemade marshmallow fluff. It also uses three egg whites, which is more than the other recipes. Creme of tartar is used in fluff, not in White Mountain Frosting.

In 7-minute frosting, there are only two teaspoons of corn syrup used, and it is heated to 160°F.

The temperature in White Mountain Frosting is relatively the same, however, homemade marshmallow fluff uses three times the amount of corn syrup, which again, significantly increases the stability of the fluff.

How to Store Marshmallow Fluff

Homemade Marshmallow Fluff can be stored in a sealed jar for up to 2 weeks at room temperature. When ready to use, you can fluff it up again by giving it a slight whip. 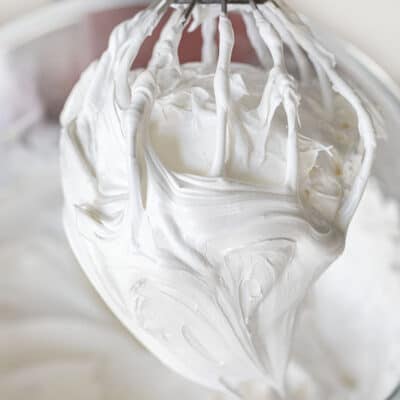