Peanut Butter Brownie Caramelitas are the ULTIMATE ooey gooey brownie! They have a sweet caramel center, along with a layer of peanut butter morsels with more peanut butter drizzled on top. These start with my super popular Brownie recipe!

There is actually a scientific reason that people love the combination of peanut butter and chocolate. It’s called Dynamic Sensory Contrast. It has to do with our taste buds loving contrasting textures. But, I don’t need a scientific explanation as to why I love this combination so much. Then, with caramel added to the mix, it takes it to a whole new level. I would gladly continue researching this chocolate, peanut butter, and caramel combination any day! And, let me start with these Peanut Butter Brownie Caramelitas!

Butter: You need 2 sticks of unsalted butter for the brownies. Melt it, then let it cool.

Caramel Sauce: Use caramel bits OR individually wrapped caramels for the caramel sauce. Be sure to unwrap them. 😉 The amount would be the same, 11 ounces.

Once you have the brownie batter ready, pour half (about 2 cups) of the batter into a prepared 9-inch square pan. (I recommend lining the pan with parchment paper, including up the sides, and spraying with nonstick cooking spray.)

Bake this layer for 10-12 minutes at 350°F. Meanwhile, prepare the caramel sauce by adding the caramel bits and milk into a medium saucepan, cooking over medium-low heat for about 5 minutes. Remove from the heat and add the vanilla, stirring until everything is incorporated.

After you have removed the brownies from the oven the first time, cover the top with a layer of peanut butter morsels. Then, pour the caramel sauce over the morsels. Let the caramel sit for a few minutes at this point.

Carefully scoop and spread the remaining brownie batter on top of the caramel. This can be tricky… I usually just use my clean hands to set the batter on top. Don’t try to move it around too much, it could mess with the caramel layer. (Have no fear, it will come together as the brownies bake.)

Finally, drizzle peanut butter on top. Bake for 18-20 minutes. Let them cool a bit before transferring them to the refrigerator to chill for at least 4 hours. 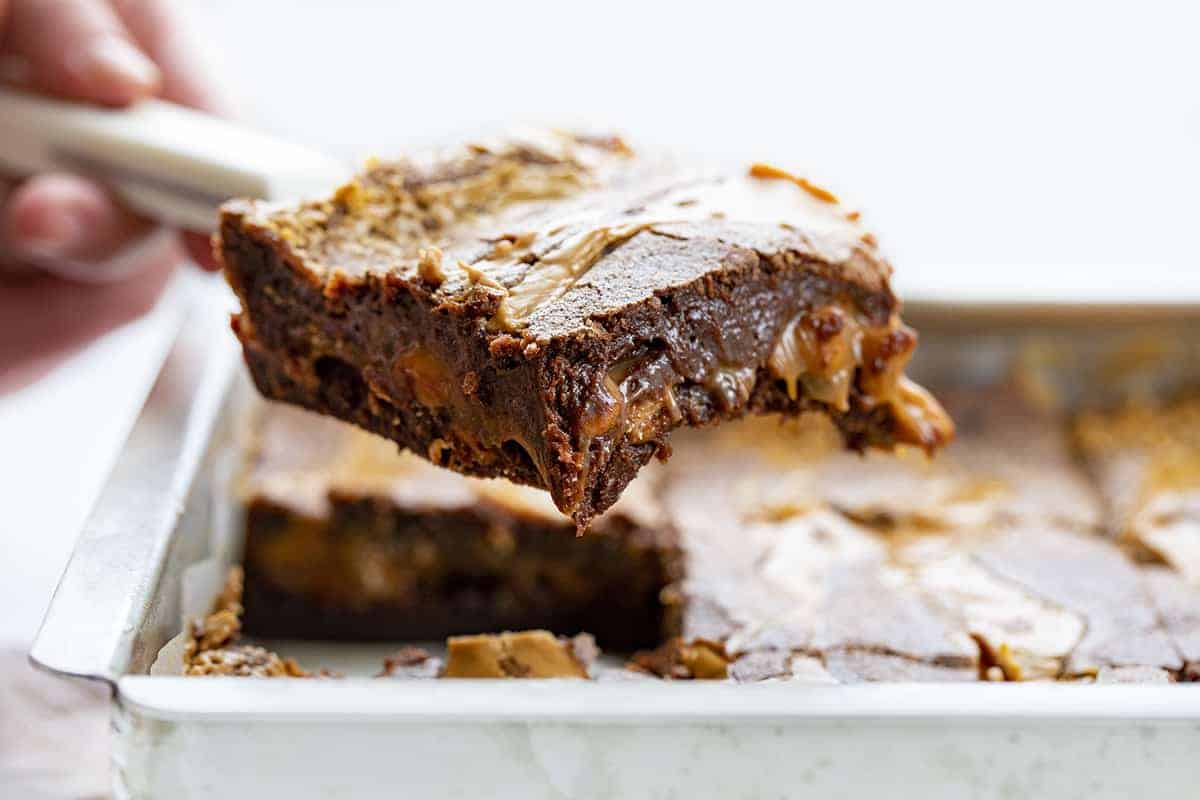 I don’t recommend attempting this recipe in a larger pan. There is not enough brownie mix for the two layers, which would mean the brownies would be too thin and not able to accommodate the filling. 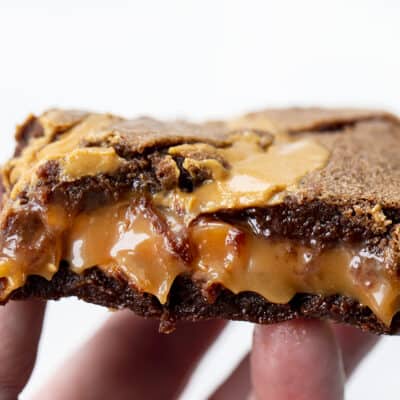