These Pop Tarts are the homemade version of the popular toaster pastries but made with a homemade pie crust filled with strawberry preserves and a homemade vanilla glaze with sprinkles on top. Try my Lemon Blueberry Danish for another tasty, fruity treat.

Kellogg’s company first introduced pop-tarts in 1964 with only four flavors and unfrosted. Well, we all know there are many more pop tart flavors with frosting on many of the varieties. It’s a quick way to eat breakfast, but I wanted to make my own so I know exactly what ingredients are in the treat. This recipe starts with my homemade pie crust. (You could use store-bought to save time!) And, of course, I couldn’t forget the glaze (with sprinkles) on top! 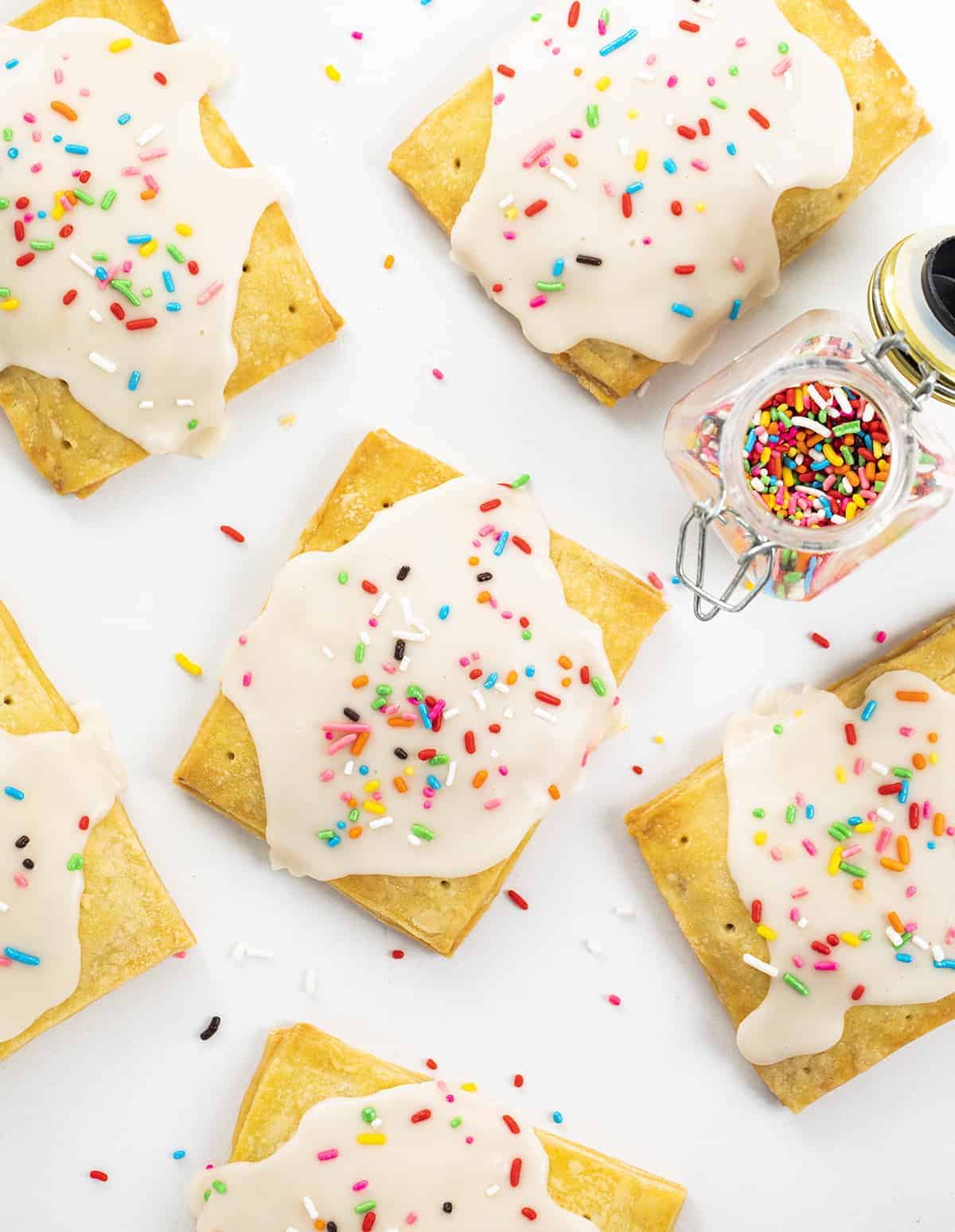 There are four parts to this recipe: the crust, the strawberry filling, the vanilla glaze, and sprinkles!

Crust: To make these homemade pop-tarts, I started with my no-fail homemade pie crust. It makes two pie crusts, which is perfect for this recipe. If you buy pie crusts, you will need two 9-inch crusts that you will have to roll out into a rectangle shape.

Filling: I stuck with one of the original pop-tart flavors, strawberry. I used strawberry preserves as the filling, but you could also use strawberry jam or your favorite flavor of preserves.

Glaze: Homemade vanilla glaze was my choice for the ‘frosting’.

Sprinkles: Adding the rainbow sprinkles really made these look like storebought pop-tarts! Of course, you can leave the sprinkles off if you don’t have any hand, or just don’t want to add them. 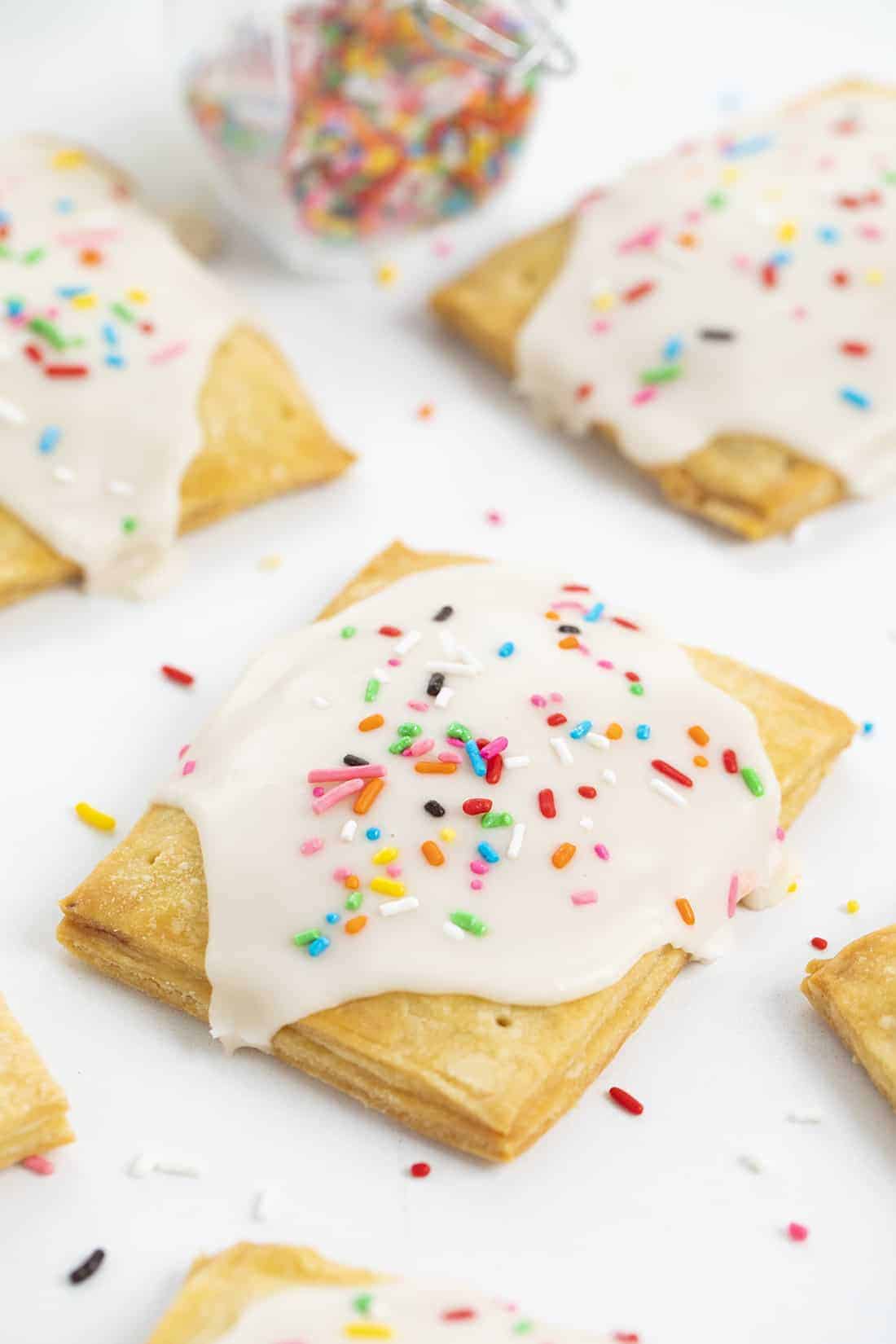 As I mentioned, I used my homemade no-fail pie crust for this recipe. You will love this crust and start using it whenever you are making a dessert or any recipe that needs a crust, for both hot and cold pies! And, again, you could use two storebought pie crusts as well.

First, to get the dough ready to be filled and shaped like a pop-tart, roll out half of the homemade dough (or one storebought pie crust) into a 12×16-inch rectangle, setting the other half in the refrigerator. The dough should be about 1/8-inch thick. Next, cut the rolled-out dough into 8 smaller rectangles, about 3×4-inches each. Before continuing, make sure you have a baking sheet lined with parchment paper. 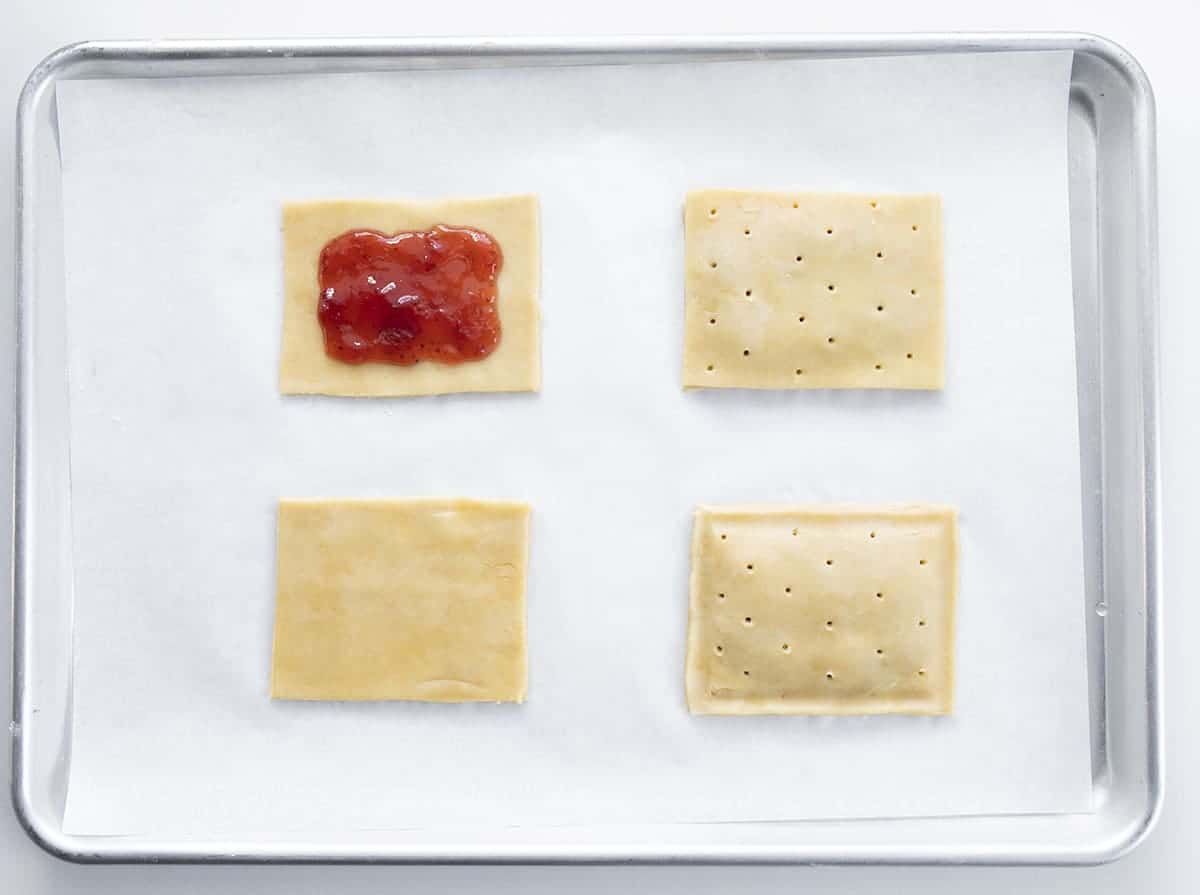 How to Make Pop Tarts

Once the first set of eight rectangles have been cut out, place them on the lined baking sheet. Top each dough rectangle with about a tablespoon of strawberry preserves, spreading the preserves out evenly over the surface. Leave a little space around the edges of the rectangles.

Take out the other half of the pie crust dough (or second storebought pie crust) and roll it out to a second 12×16-inch rectangle that is about 1/8-inch thick. Using a skewer, poke holes all over the surface of the dough. Cut out the dough into 8 smaller rectangles (about 3×4-inch).

When ready, wet the edges of the filled dough rectangles with water using a pastry brush. Then, fit a second rectangle on top of the filling and use a handle of a wooden spoon to seal the edges and make dimples in the dough. Repeat this with the remaining pop tarts. 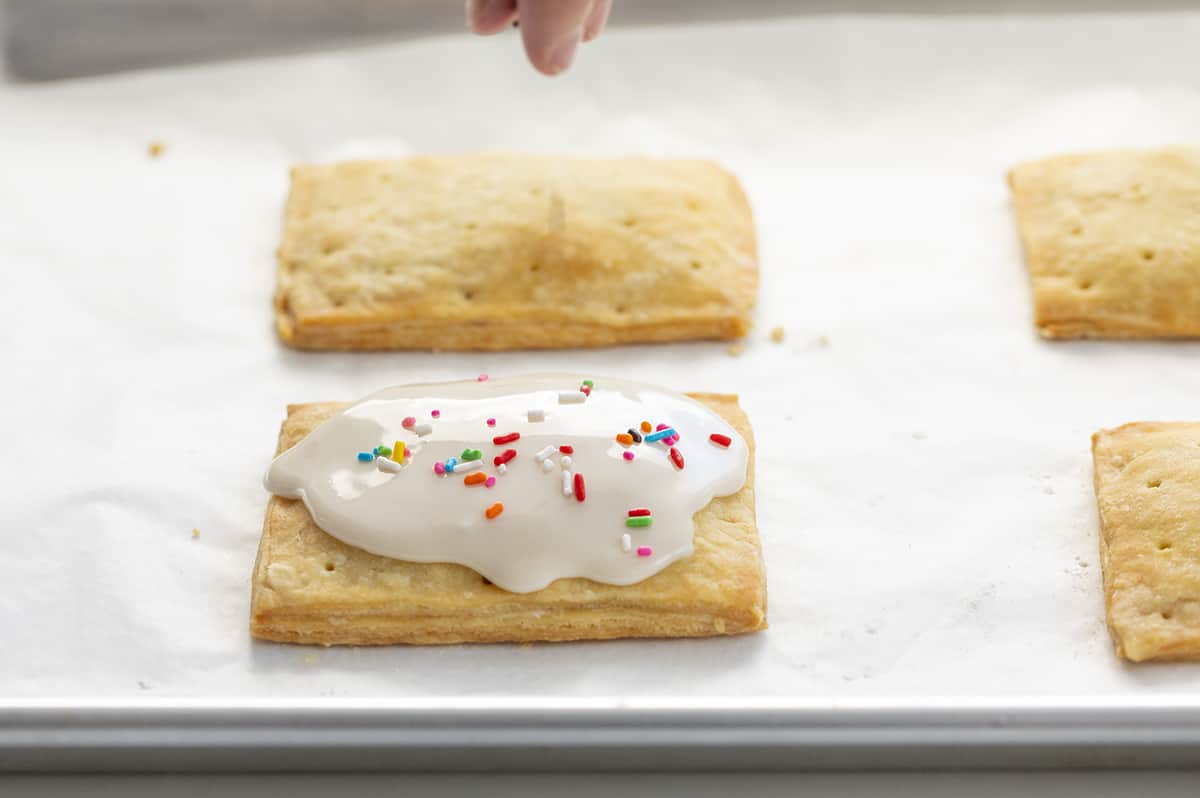 As the pop tarts are cooling, make the vanilla glaze. To make the glaze, in a medium bowl, combine the confectioners’ sugar, vanilla, and a few teaspoons of water. Whisk to combine, adding water a teaspoon at a time, until you have reached your desired consistency.

Working one at a time, drizzle the glaze over a pop tart. You could use an offset spatula to spread out the glaze. Then, add the sprinkles on top. Be sure not to glaze all the pop tarts before adding sprinkles; the sprinkles won’t stick. Let the glaze set before serving. Please note: This glaze will not harden as much as the storebought, but it does harden enough to stack them. Store the pop tarts at room temperature in a sealed container for up to three days. 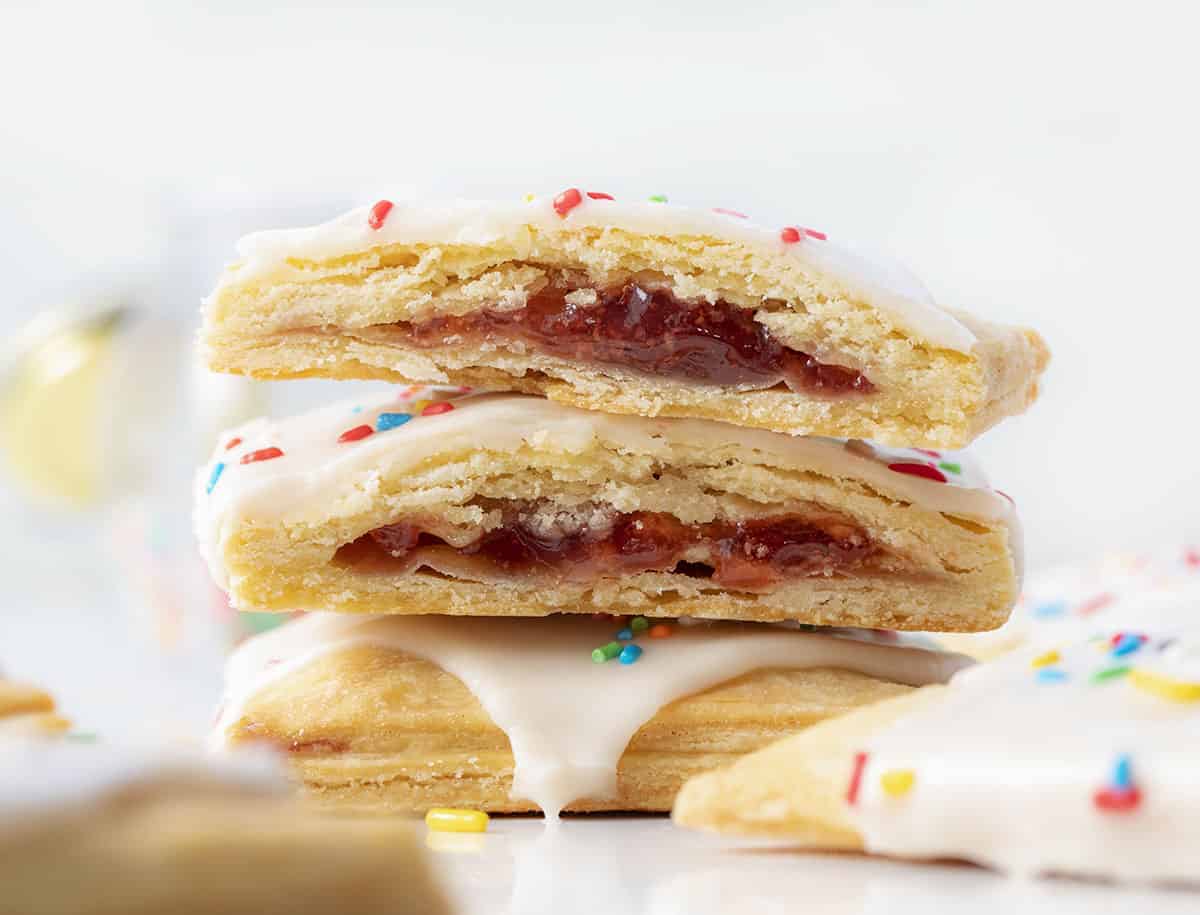 Can I Freeze Homemade Pop Tarts?

Yes! In fact, you can freeze the pop tarts before they have been baked or after. To freeze them before baking, get them filled and sealed in the pie dough. Then, place them in the freezer for a couple of hours, or until frozen. Then, store the pop tarts in a labeled and dated freezer-safe container until ready to be baked (up to three months). You can bake them directly from the freezer; just add a few more minutes of baking time.

To freeze the pop tarts after they have been baked, let them cool completely before placing them in the freezer for a couple of hours. Once frozen, store in a labeled and dated freezer-safe container for up to three months.

Can I Make These in an Air Fryer?

Yes, this treat can be made in an air fryer! To make pop tarts in an air fryer, follow the same instructions as you would follow to bake them in the oven. Then, instead of using the oven, cook them in the air fryer for 12 minutes at 350°F. Again, let the pop tarts cool before adding the glaze and sprinkles. 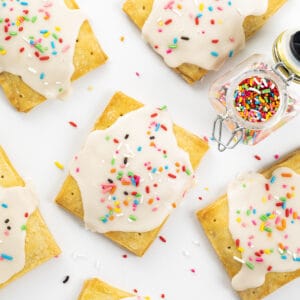 Pop Tarts are the homemade version of the popular toaster pastries but made with a homemade pie crust filled with strawberry preserves and a homemade vanilla glaze with sprinkles on top.