Banana French Toast Pockets are coated with cinnamon, filled with a banana and cream cheese mixture, sealed together without the crust to make a sweet and tasty breakfast treat. Top the crustless pockets with some walnuts and syrup to ’round’😊 everything off. For more French toast recipes, be sure to try my Air Fryer French Toast Sticks or Baked Pecan French Toast. 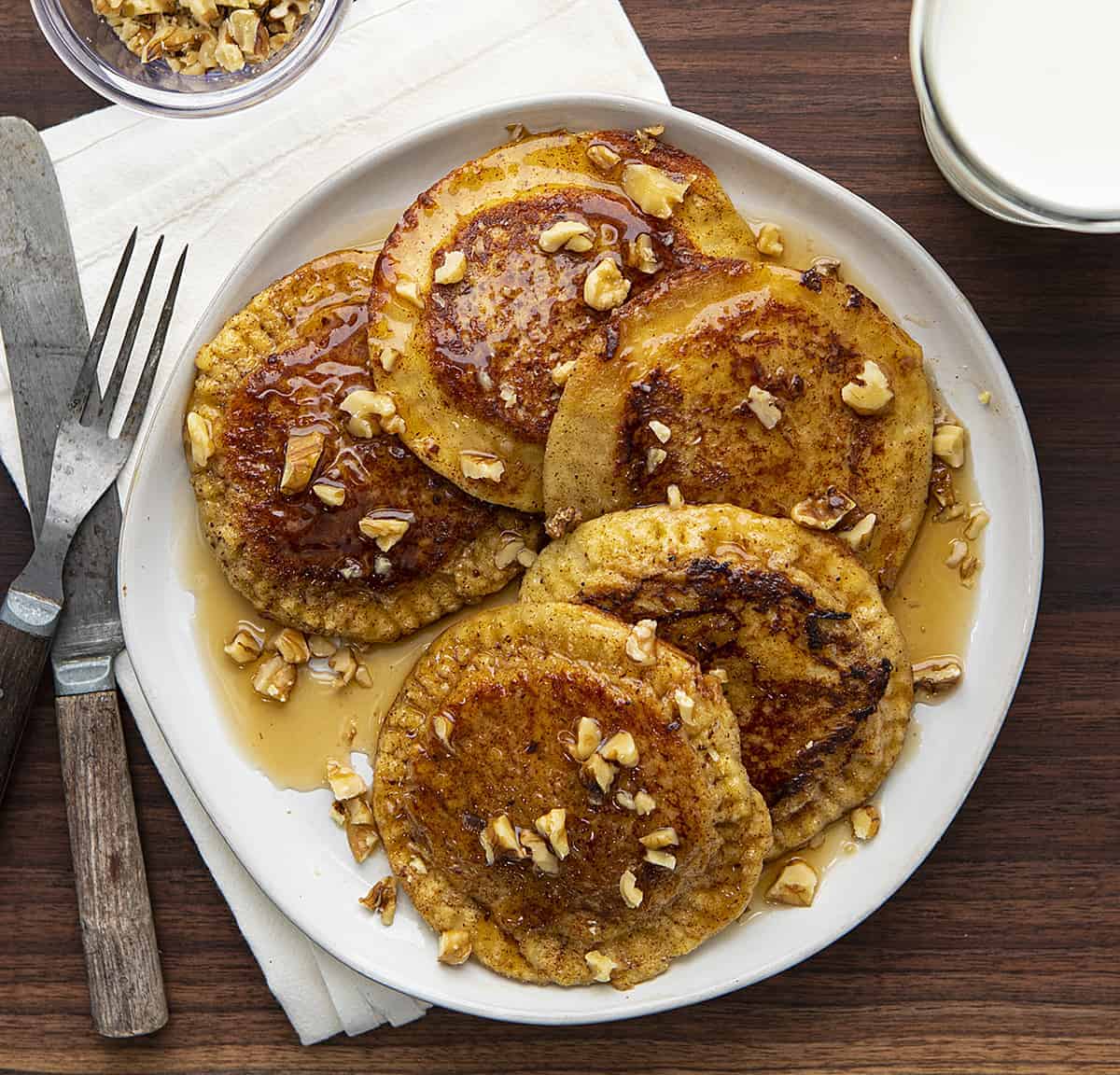 These stuffed French Toast Pockets are a delicious way to enjoy breakfast. Yes, French toast is great on its own, but it’s fun to play around with a classic recipe and step it up a bit! These small, round, crustless pockets of French toast hold a creamy and decadent banana and cream cheese filling and are topped with walnuts and maple syrup. 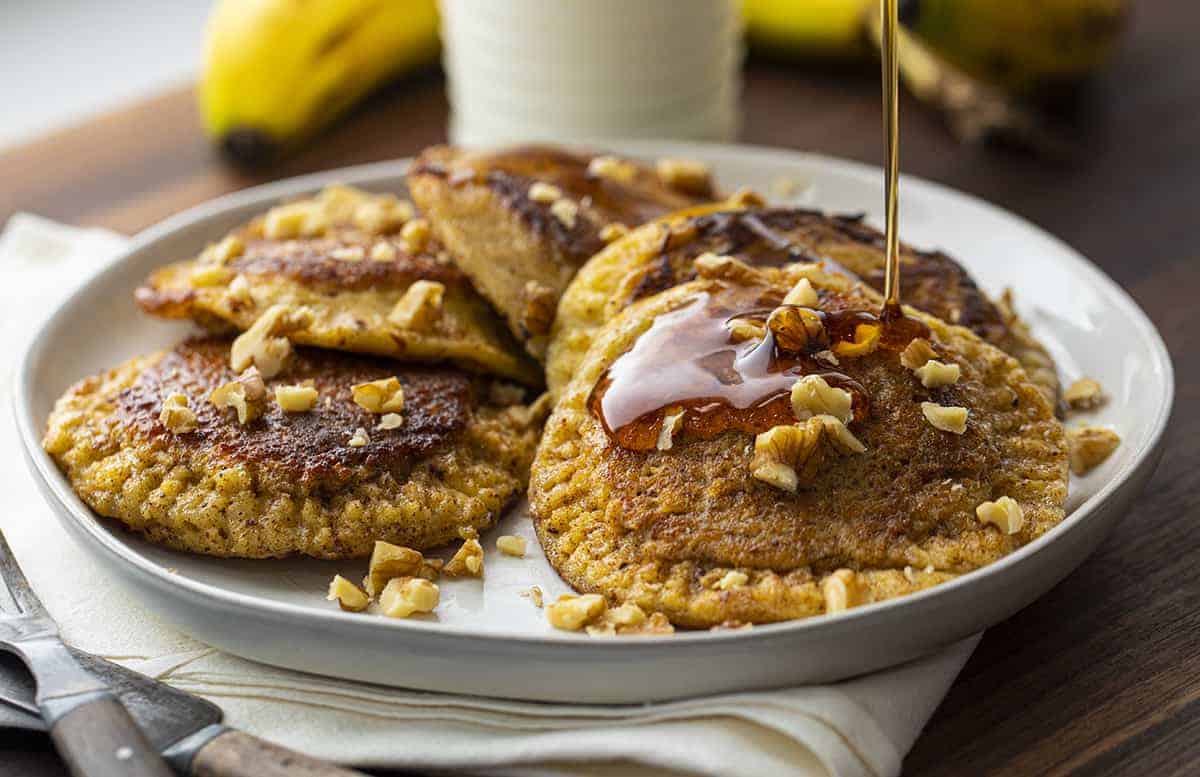 This is definitely a decadent treat, but I will give you some ways to lighten it up a bit after I list the ingredients you will need. There are three main parts to the recipe–the stuffed french toast, the egg mixture coating, and the toppings.

If you want to lighten up the recipe a bit, you can always use whole wheat bread, low-fat cream cheese, and coconut oil instead of butter. 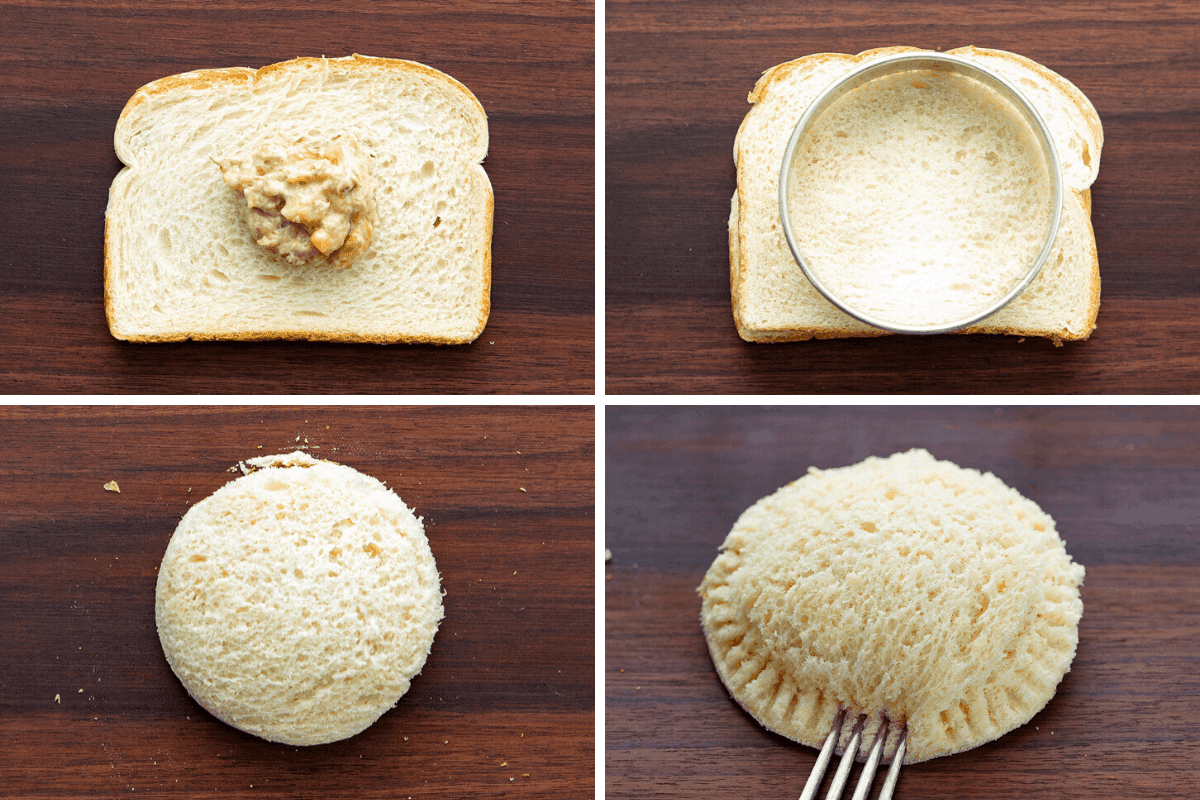 Banana French Toast Pockets are pretty simple to make, and they make breakfast more fun! To get started, mash half of a banana in a bowl and mix it with the cream cheese, sugar, and cinnamon. Lay out six slices of bread and add about 1 tablespoon of the banana and cream cheese mixture to the center of each slice.

Top each slice of bread with a second slice, creating a sandwich. Use a 3-inch circle cutter to cut off the crusts. Or, just use a glass to get that circular shape. (They will not be very big.) Yes, you will have lots of crust leftover, but you could cut up the crusts, make another batch of the egg mixture and cook up some French toast bites! 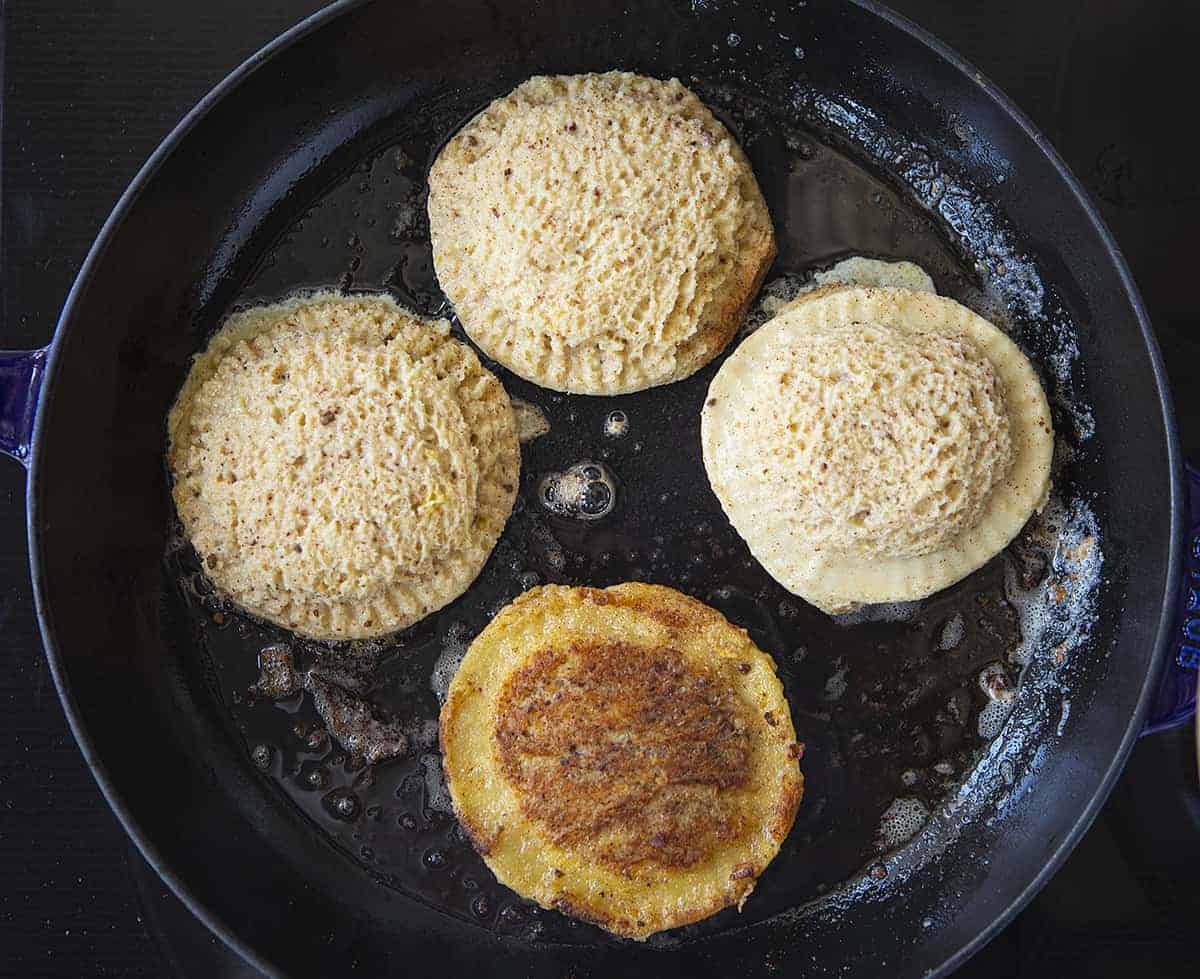 After you have the crusts removed, use the tines of a fork to seal the edges of the six pockets and set them aside as you prepare the egg mixture. In a small bowl, whisk together the egg, milk, vanilla, and cinnamon. Then, melt the butter in a skillet over medium heat.

To cook the pockets, dip each pocket in the egg mixture, covering both sides, and add the pockets to the skillet. Because they are small, you could probably get about 3 pockets in the skillet at a time. Let the bottoms get to a golden brown (about 3 minutes), and then turn them over to cook the other side. Place them on a plate and serve them with chopped walnuts and maple syrup (or your favorite toppings).

You could also use a griddle to cook the pockets. Set the temperature between 325°F and 350°F on your griddle and cook them until golden brown on each side and warmed through. As I mentioned, these are small, but you can always double or triple the recipe if you need more! 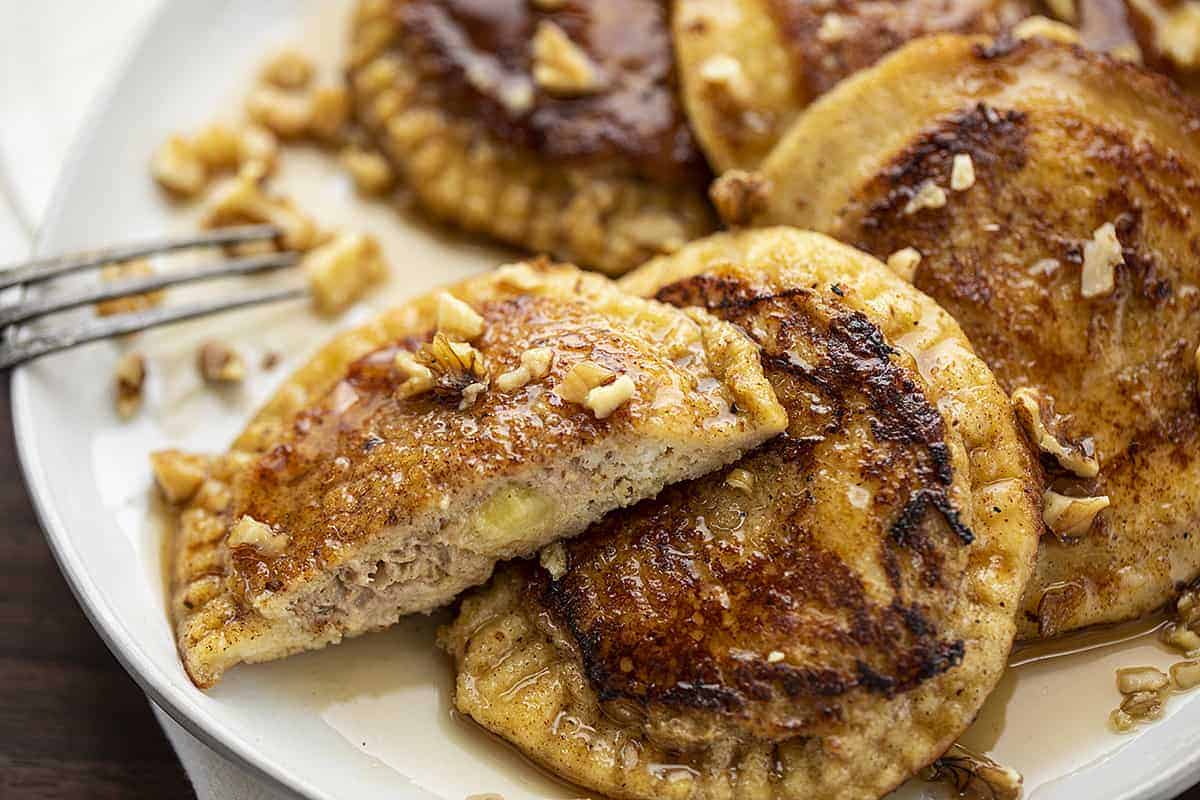 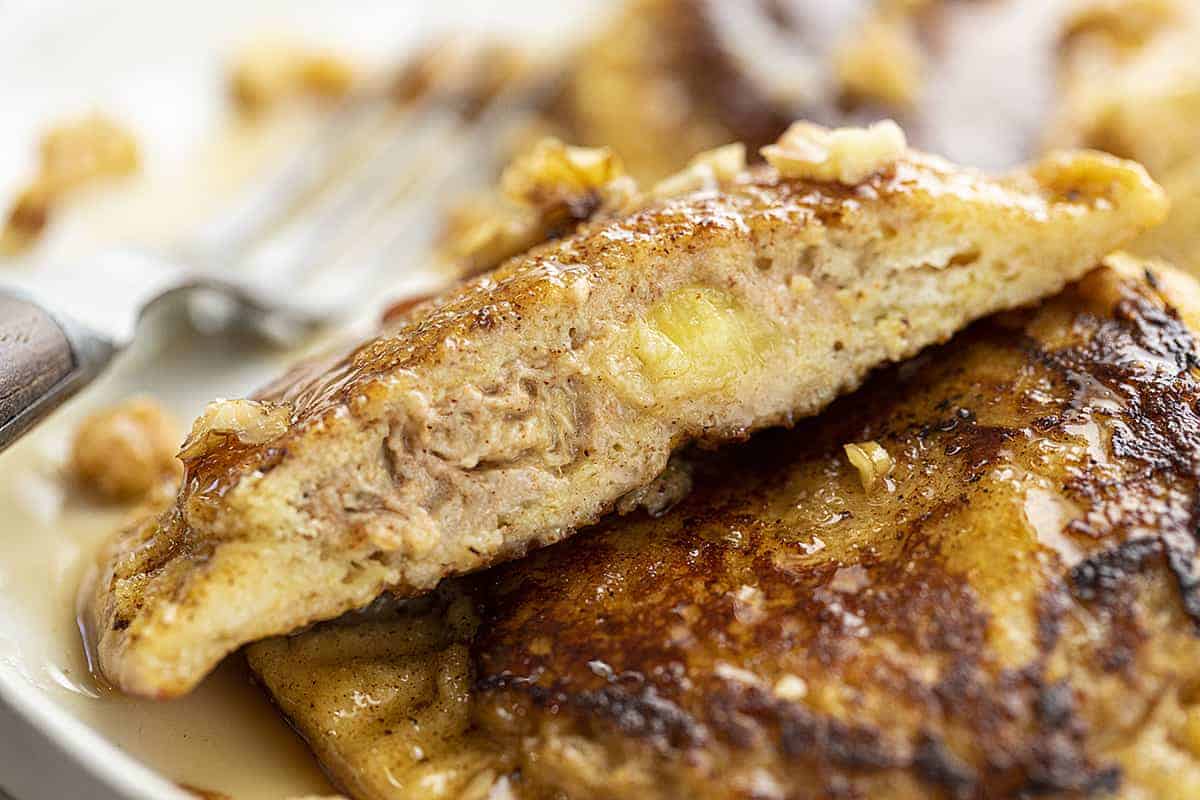 I saw this done on TikTok (TikTok Banana Bread French Toast Pockets) and just had to try it. These are a good and fun treat for the kiddos. (Or adults!) But it does “waste” a lot of bread. But as I mentioned above, you can cut those pieces up and make French Toast Bites. 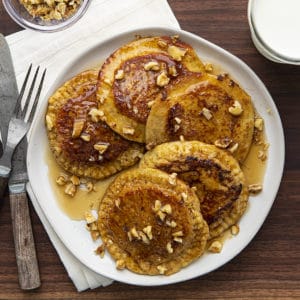 These small, round, crustless pockets of French toast hold a creamy and decadent banana and cream cheese filling and are topped with walnuts and maple syrup.