Banana Pudding Puppy Chow (Muddy Buddies) is an alternative flavor to the popular puppy chow snack. With almond bark and banana cream pudding mix, you will have a new favorite fun and sugary snack that will leave you licking your fingers and brushing off the evidence. Try my Lemon Puppy Chow recipe for a citrusy twist on the classic treat, or stick with the traditional version of my Puppy Chow. Note: This is HUMAN food, not for pets. 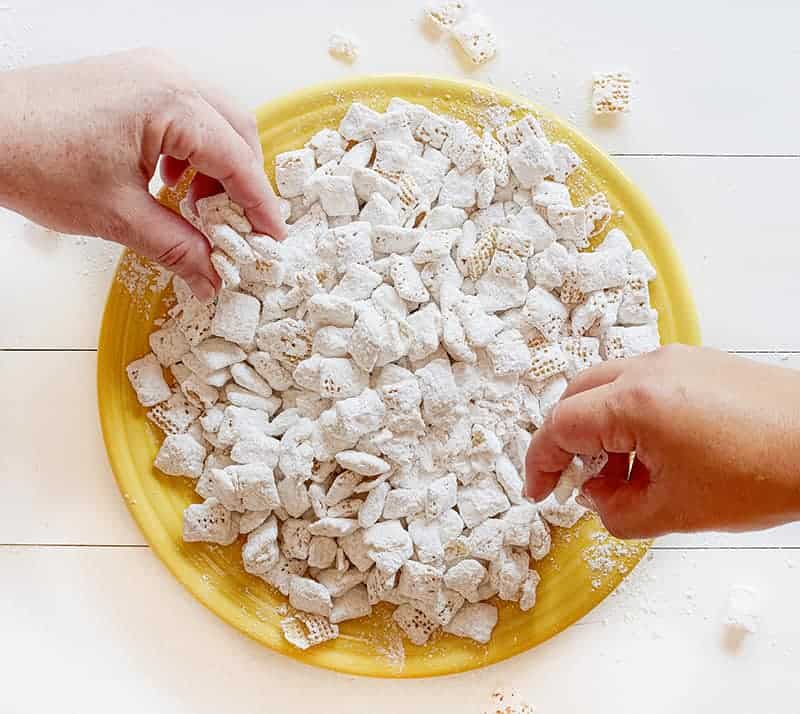 Get ready to be addicted to another take on the classic puppy chow! With just four ingredients and a few minutes, this delicious snack is ready to go fast. I absolutely love banana pudding, and when I used the mix as part of the Banana Pudding Puppy Chow, the flavor was the same. Subtle banana and sweet white chocolate flavor… with a bit of sugar of course! 😉 It’s like a handful of banana cream pie without actually making the pie. 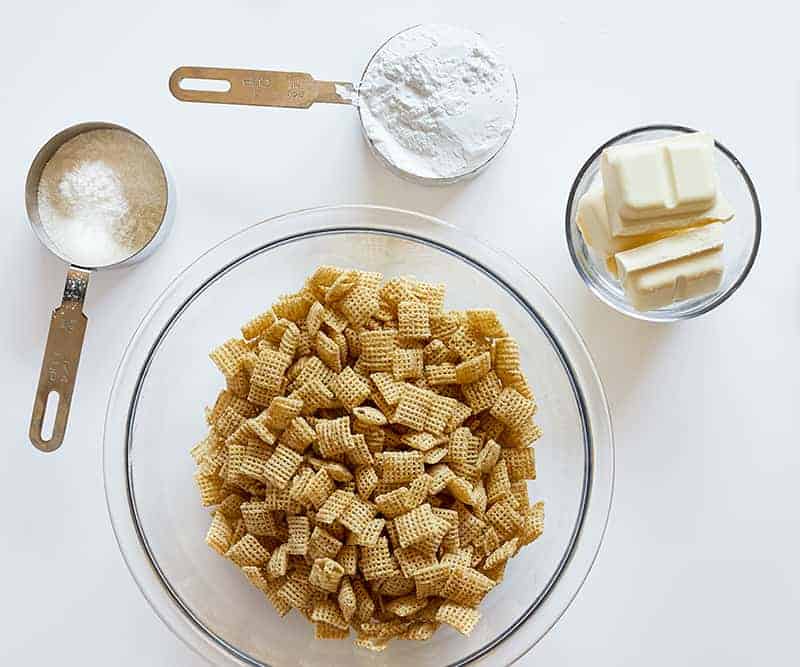 This is as easy to make as the original puppy chow, using only four ingredients! 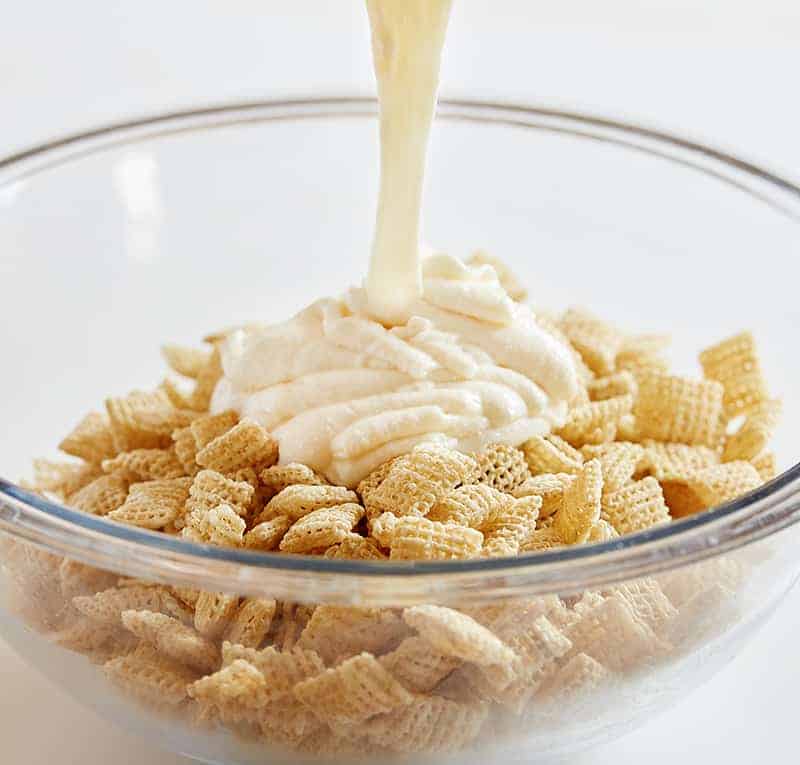 Mixing it all Together

First, melt the almond bark in the microwave. I like to do this in 30-second increments, stirring in between, until it is melted. Next, mix in the banana pudding mix with the almond bark. Now, you are ready to pour the mixture onto the cereal. Be sure to use a big enough bowl and a spatula so all of the cereal is coated. Here comes the fun part! Put the cereal in a large plastic sealable bag, sprinkle in some confectioner sugar, and shake away! Turn on some fun music to shake it even more!

Pour the Banana Pudding Puppy Chow onto a sheet pan to let it set. Then, it is ready to be chowed down, pun intended : )

Use chocolate morsels for a fun twist.

Add in dried banana chips! (The adults loved this, the kids did not as much.)

Serve it over a banana split! 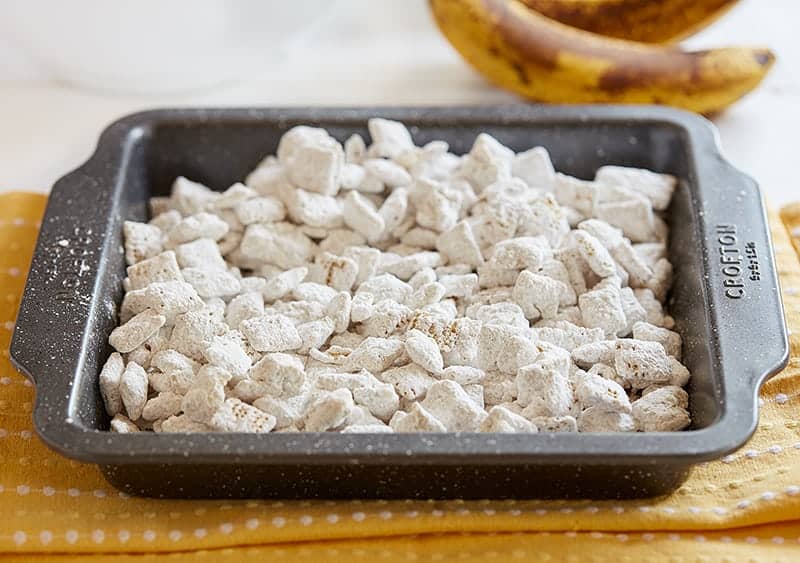 You can store the puppy chow in an airtight container (or in the bag you made it in) on the counter or in the refrigerator for up to 2 weeks, but I doubt it will last that long! (That is the official answer by the way, I have never refrigerated puppy chow.) 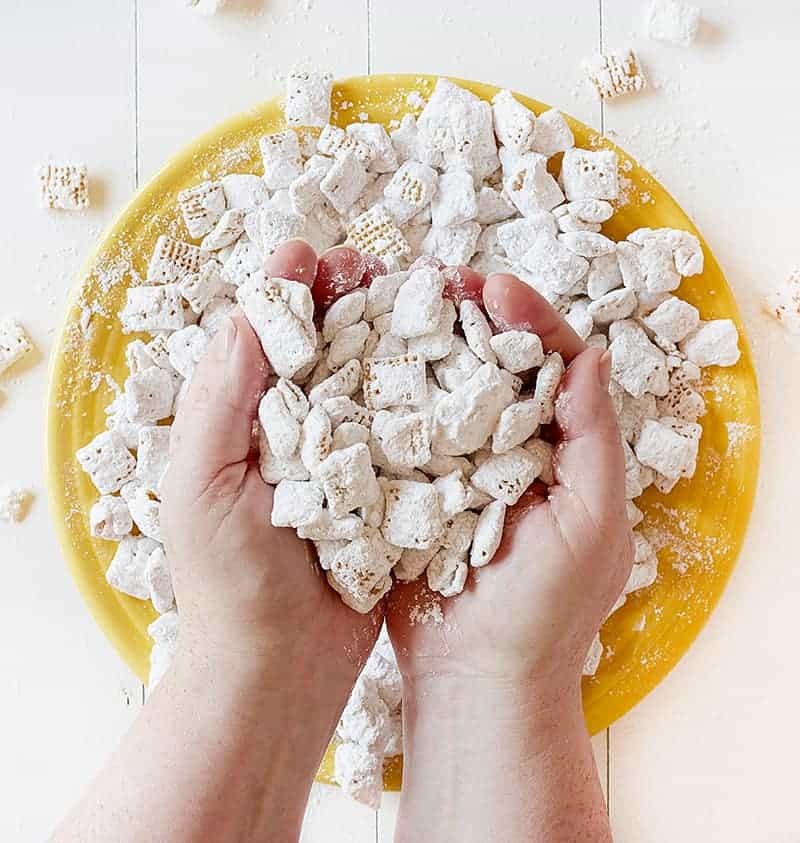 Try some of my other favorite twists on the popular puppy chow (Muddy Buddies) treat. 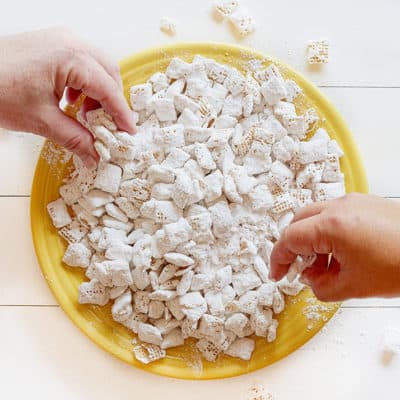