Cinnamon Toast Crunch French Toast adds more awesome cinnamon and sugar flavor and lots of crunch to each bite of this popular breakfast. I loved this recipe so much that I made a Cornflake Crunchy French Toast that I think you will love! But, if you are a purist, try my beloved classic Best French Toast.

If you love a piece of cinnamon and sugar toast, you will LOVE this French toast. Cinnamon Toast Crunch cereal was made to replicate the flavors of cinnamon toast, so it is the perfect complement to French toast. In fact, I could eat a slice of this sweet and crunchy breakfast straight off the griddle without any added butter or syrup!

Bread: I like to use thick slices of bread for French toast. In fact, the optimal thickness for French toast is 3/4-inch to 1-inch thick. You could also use your favorite kind of sturdy loaf of wheat or white bread. Or, try a baguette or brioche bread for a couple more options. And, don’t worry about using older bread; if it is a tad bit stale, it’s still great to use!

Cereal: Look for a box of Cinnamon Toast Crunch the next time you are at the grocery store. Now, instead of it being a great snack or breakfast cereal, it is a sweet and crunchy coating to the French toast. You will probably want to use the rest of the cereal for my Cinnamon Toast Crunch Cookies!

How to Cook French Toast

We used a griddle to cook cinnamon toast crunch french toast. However, a skillet works great, too! No matter which way you make the french toast, be sure to add some butter to the griddle or skillet before each batch.

Why Is the Cereal Burning?

Watch the French toast closely when cooking it. All you need is a little bit of butter added to the griddle or skillet before each batch. If you notice the cereal is burning, carefully wipe down the griddle, add fresh butter, and turn the heat down.

As I stated above, this breakfast can be enjoyed immediately, with no toppings necessary! However, you could also serve it with butter, maple syrup, bananas, yogurt, and honey. Oh, and if you want to serve up a slice of this french toast as dessert, offer some whipped cream! 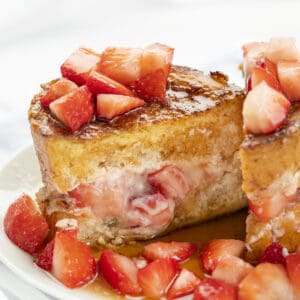 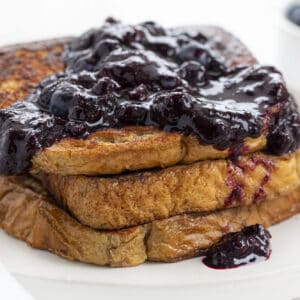 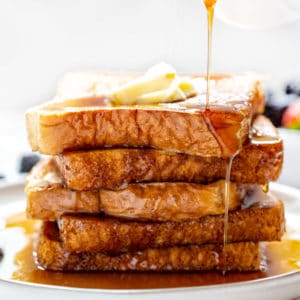 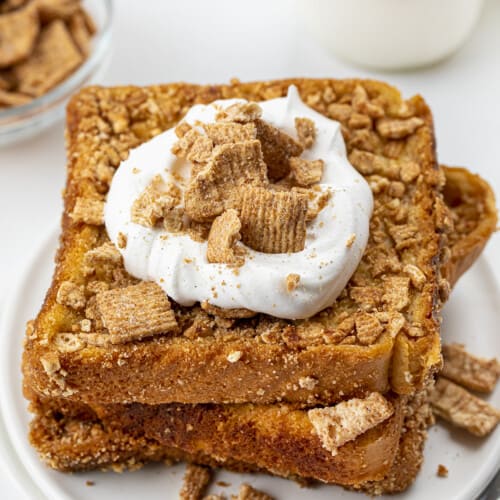 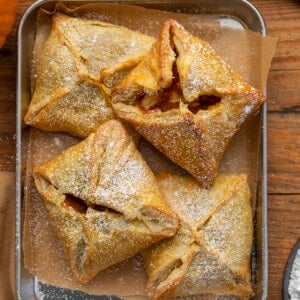