No-Churn Ice Cream is soft and creamy homemade vanilla ice cream made in just a few minutes with no ice cream maker required! This recipe is really, really good. Most taste-testers had no idea that it was not real-deal (ice cream machine) ice cream! If you love ice cream, I’ve got Chocolate Ice Cream and Blueberry Ice Cream and so many more!

There is no special equipment needed to make this batch of fantastic homemade vanilla ice cream. I used a stand mixer, but you could also get away with using a handheld mixer. It starts by making the whipped cream. Then, it’s mixing the ingredients together and freezing it in a chilled loaf pan to let it set up. This recipe made 5 cups of ice cream.

Heavy Cream: Also known as heavy whipping cream, this is a liquid with 36-40% fat. This will be whipped up into a cream to use in the ice cream.

How is this Different from Making Ice Cream in a Machine?

What is the Difference Between Soft and Stiff Peaks in Whipped Cream?

When making the ice cream, the first step is to whip the heavy cream. You will end up with stiff peaks, but what does that mean? Stiff peaks are sharp peaks that can stand on their own even after the beater has been removed.

Yes! So creamy. I could not believe how creamy the texture of the ice cream was when I tasted it. If you prefer grainy ice cream, this recipe is not for you. Because of the smooth and silky whipped cream folded into the sweetened condensed milk mixture, you will enjoy velvety texture in every bite!

Can I Add Flavors to this Vanilla Ice Cream?

Of course! (However, please try a bite on its own first…yum!) Anyway, feel free to add your favorite candies, fruits, nuts, or even cookies to the ice cream. Or, top off a piece of apple pie or Banana Split Nachos with a scoop or two (or three, or four…). 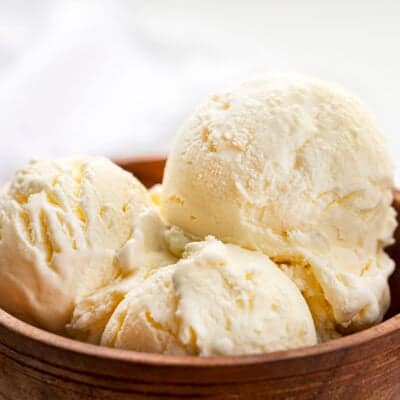