Strawberry Icebox Cheesecake is a light and fluffy no-bake dessert with fresh strawberries and a graham cracker crust. Be sure to give my Woolworth Icebox Cheesecake Recipe a try for the classic dessert that has a hint of lemon flavor.

This recipe is based on my Icebox Cheesecake Recipe, direct from Woolworths. The Woolworth department store started out as a five-and-dime store, selling things that only cost 5 or 10 cents. Eventually, the lunch counter was an added attraction. The difference in this Strawberry flavored Icebox Cheesecake is using strawberry jello mix (instead of lemon) and a layer of freshly sliced strawberries. 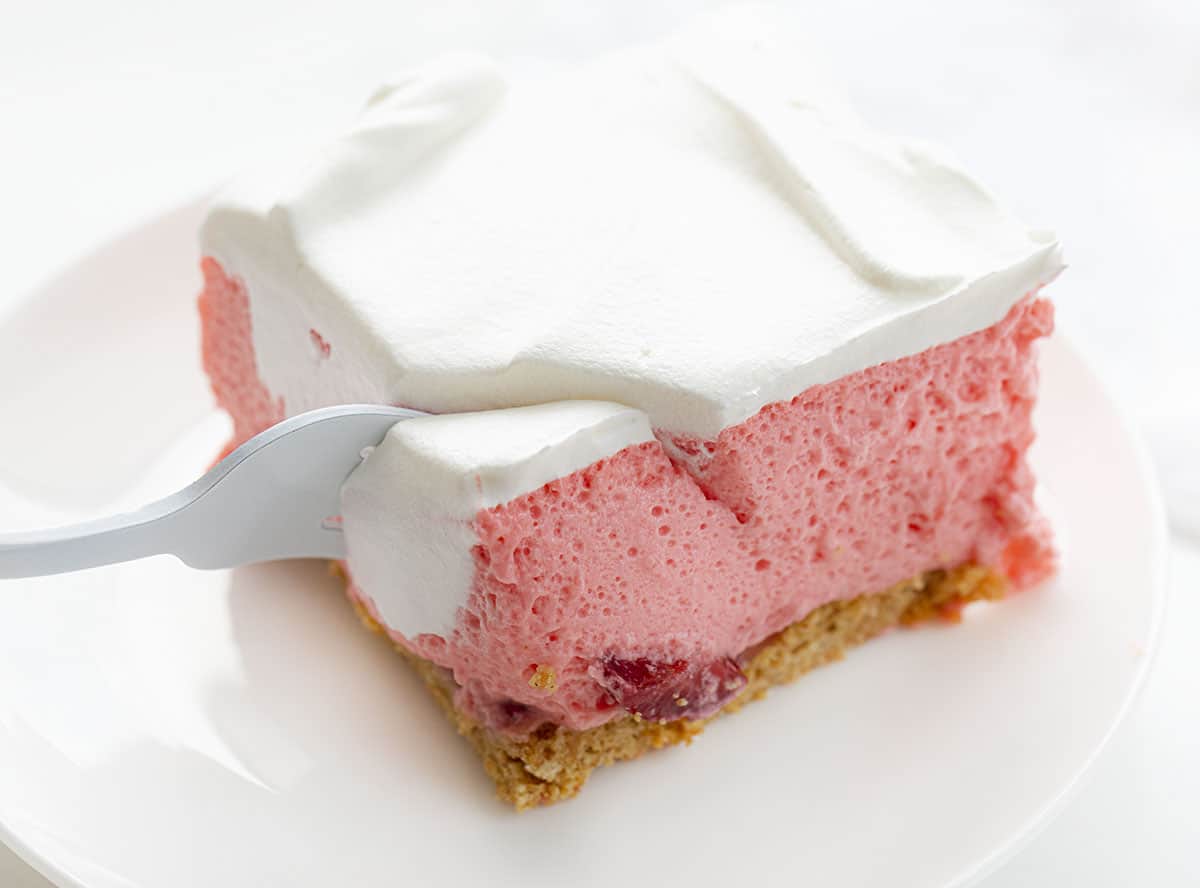 There are two parts to this no-bake dessert–the graham cracker crust and the light and fluffy strawberry-flavored filling.

Jello Mix: The strawberry-flavored box of jello mix gives the dessert a strawberry flavor and a beautiful pink color.

Evaporated Milk: Evaporated milk is super-concentrated milk that helps give the dessert filling its creamy texture. It should not be confused with sweetened condensed milk, which has added sugar. They should not be used interchangeably in recipes. Be sure to place the can of evaporated milk in the freezer, along with the bowl and whisk attachment of a stand mixer.

Strawberries: Thinly slice the strawberries before adding them on top of the crust. 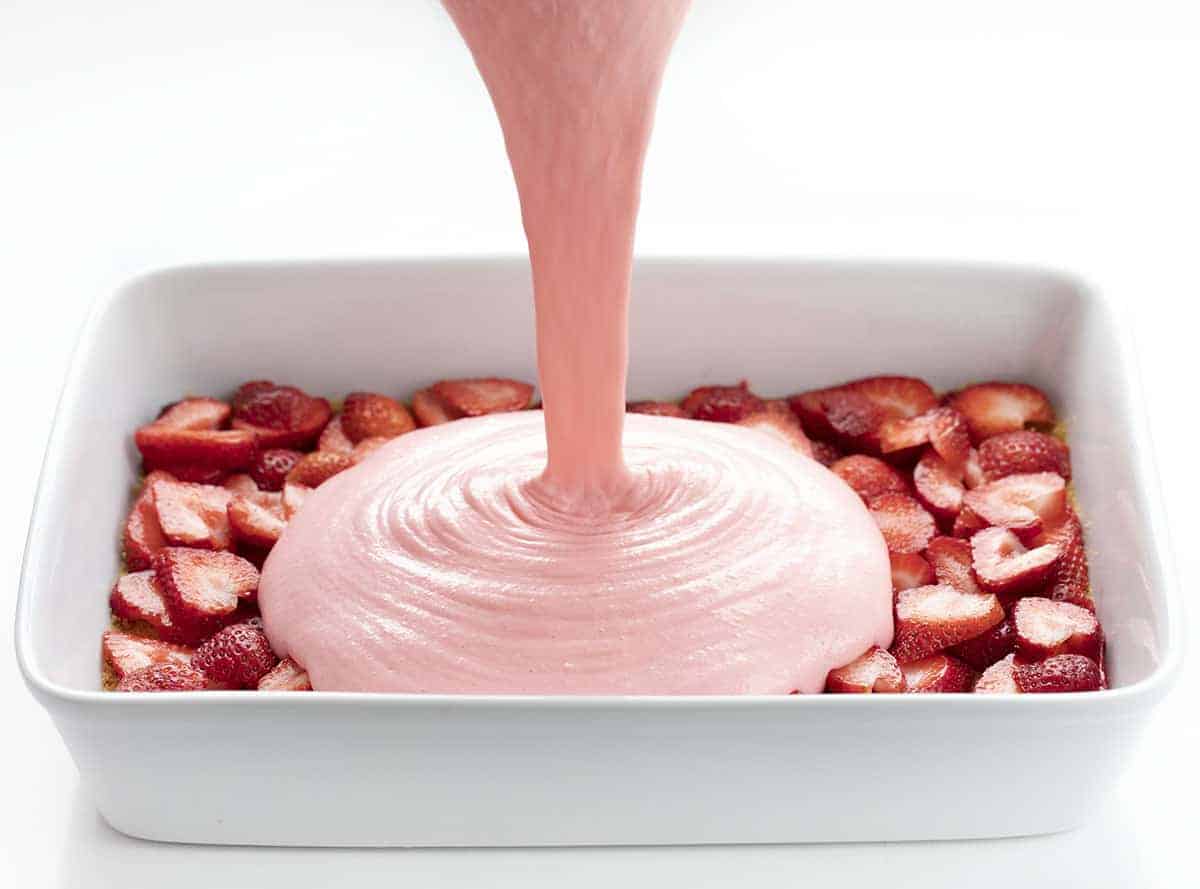 Chilling the Bowl and Whisk Attachment of Stand Mixer

The reason behind this is to make it easier to form peaks in the evaporated milk when whipped. The milk has a lower fat content compared to whipping cream, so it’s harder to whip. 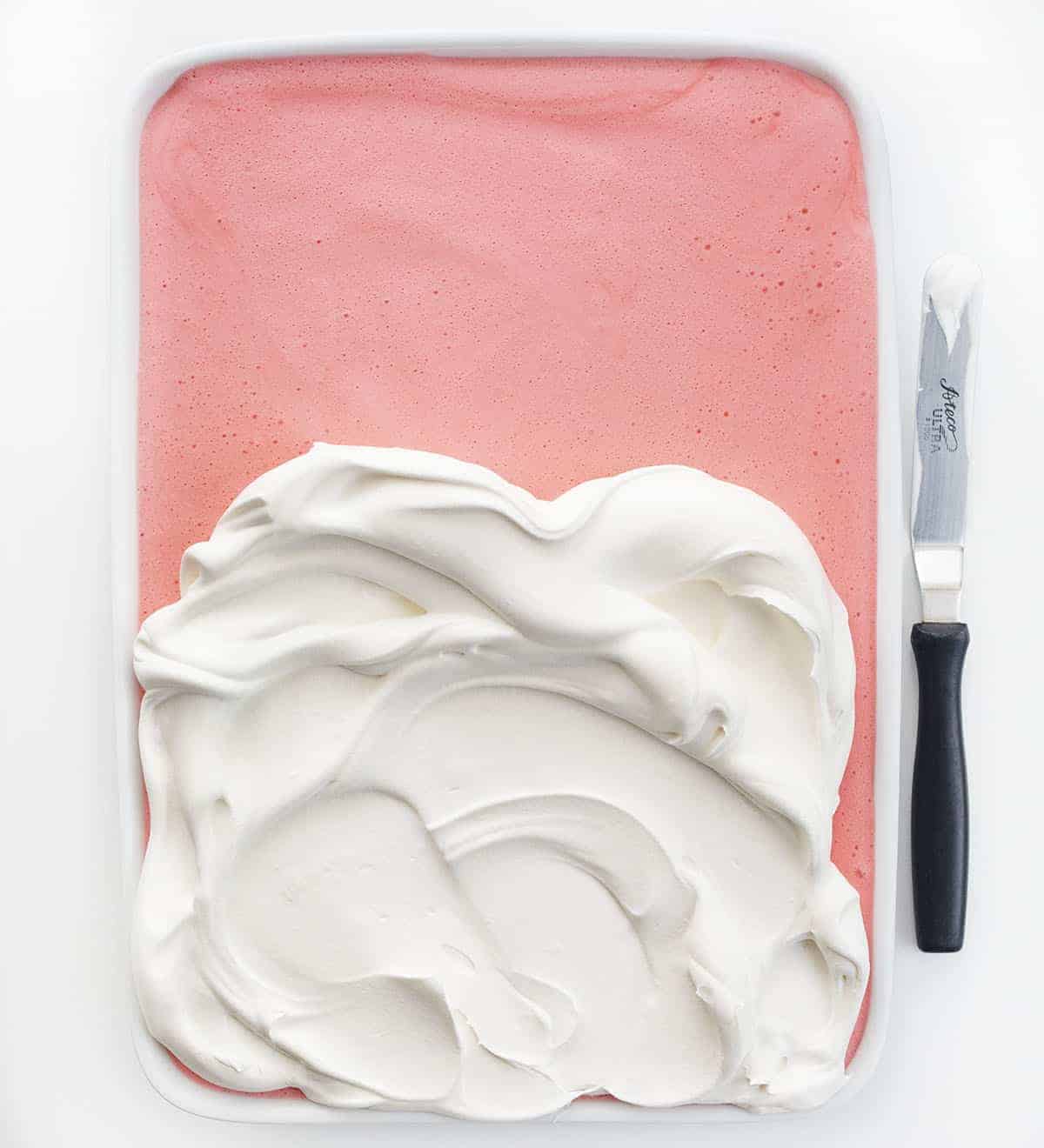 To make the crust, first, add the graham crackers and sugar to a bowl. Mix the ingredients together, and then add the melted butter. Make sure that every single graham cracker crumb is coated in butter. The butter binds everything together; there should be no dry spots.

Press the mixture to the bottom of a 9×13-inch baking dish that has been sprayed with nonstick cooking spray. Then, add the sliced strawberries in a single layer on top of the crust. Set this aside as you prepare the filling.

With the crust in the pan, it’s time to get the rest of this no-bake dessert made. To make the filling, first, cream together the room temperature cream cheese and sugar with a hand mixer. The reason for creaming is to get a lot of air in the mixture, so mix until you have a light and fluffy consistency. Next, mix in the vanilla.

In a separate bowl, add the jello mix and boiling water. Whisk together until the jello mix has dissolved. Then, pour in the cold water and place the bowl in the refrigerator to chill for a few minutes. The jello will not set; it will just be in the fridge while you whip the evaporated milk.

To whip the evaporated milk, take the bowl of the stand mixer and whisk attachment out of the freezer, along with the can of evaporated milk. Add the chilled milk to the bowl and whisk on high for about 5 minutes, or until soft peaks form. Soft peaks will just briefly ‘stand’ on their own before falling back into the milk.

Once you have soft peaks, add the jello mixture from the refrigerator and whisk for an additional 30 seconds or so. Then, add the cream cheese mixture and whisk for another 30 seconds. Finally, pour the mixture into the pan, over the graham cracker crust.

Chill the dessert in the refrigerator overnight before serving. The end result is a light and fluffy strawberry dessert, lighter than a cheesecake. Once chilled, serve the icebox cheesecake topped with homemade whipped topping. 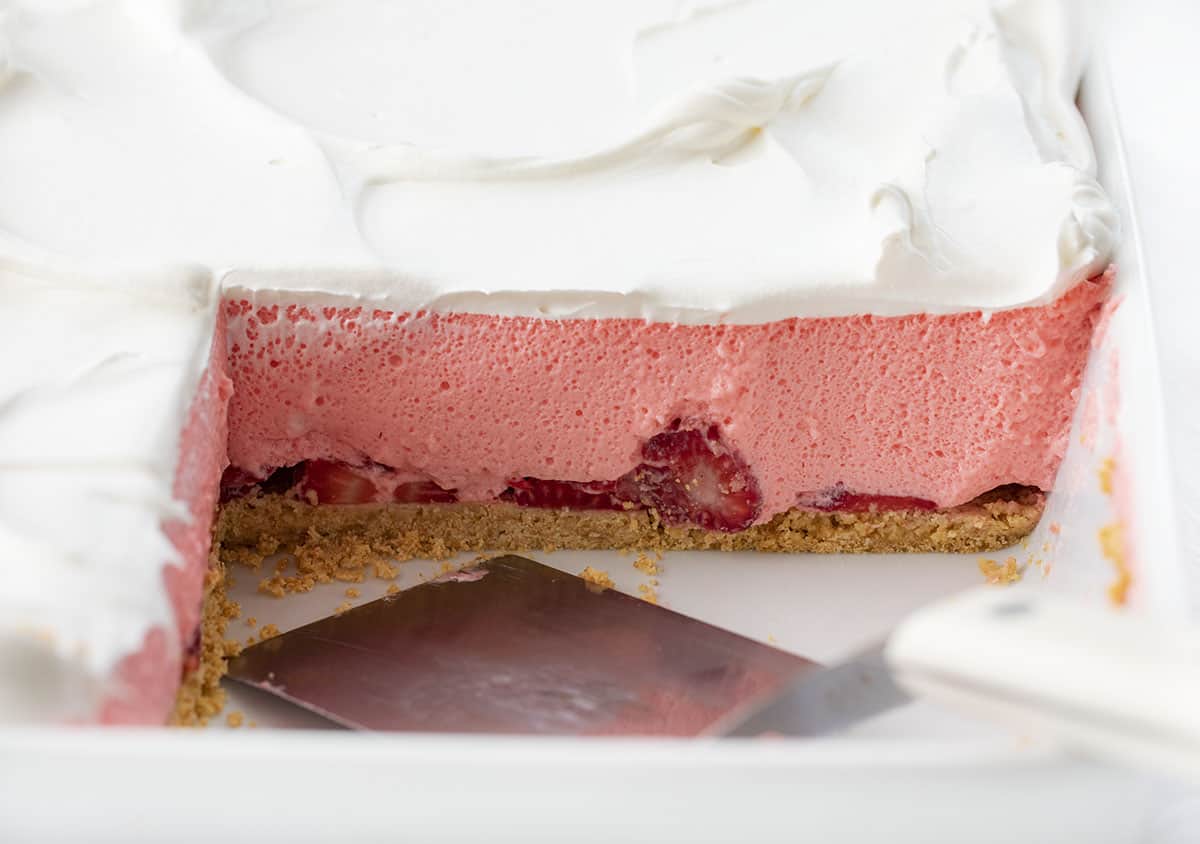 Do I Have to Freeze Icebox Cheesecake?

Nope! You don’t have to freeze this dessert, even with Icebox in the name. In fact, an icebox used to refer to a non-mechanical ‘refrigerator’ before we had electric refrigerators. So, you do have to store the cheesecake in the refrigerator (covered, for up to a week), but no need to make room in your freezer. The only freezing needed with this recipe is to chill the bowl and whisk attachment of a stand mixer, along with the evaporated milk.

Heaven. Seriously! It is light as air and melts into a velvety cloud of creamy deliciousness in your mouth. It’s almost like a “strawberry cloud cheesecake”. This dessert is worth making and there is a reason the original Woolworth Icebox Cheesecake is so famous. 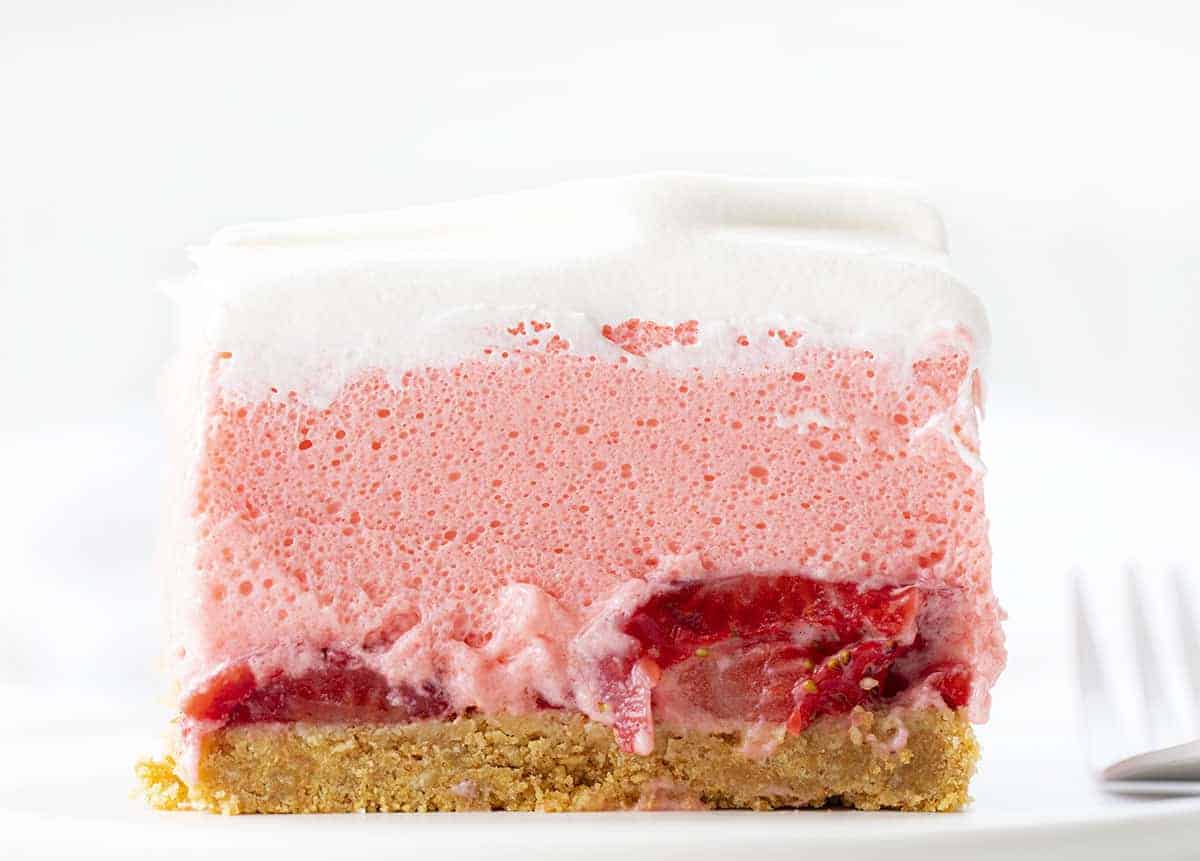 Strawberry Woolworth Icebox Cheesecake is a light and fluffy no-bake dessert with fresh strawberries and a graham cracker crust.