As soon as I made my Two Ingredient Chocolate Mousse, I knew I had to make a white chocolate version, still sticking to just two ingredients. The final result is again, a light and whipped texture that makes you want to savor every bite! It is such an elegant dessert, I felt like I should eat it daintily and slowly. But, nope! No one was here to judge me, anyway.

Don’t be fooled by how deliciously sweet this dessert is…it is only two ingredients, but it tastes like it took hours to prepare!

I used white chocolate morsels in this recipe, but there are other options when it comes to white chocolate. White chocolate contains only cocoa butter, and no cocoa solids, which gives it a light color. But, there is no doubt that it adds sweetness to any dessert.

The first step in making Two-Ingredient White Chocolate Mousse is to melt the white chocolate pieces.

To melt them, heat up 1/2 cup of the cream in the microwave. I heated it up for about 50 seconds, but you may need to heat it up for a bit longer, depending on the power of your microwave. Add the white chips to the warm cream and stir until the white chocolate is melted. This can take up to two minutes, so be patient. Set that aside while you beat the remaining cream.

In a medium bowl, pour in the remaining cup of cold cream. Using a hand-held or stand mixer, beat the cream until soft peaks form. When a recipe calls for the cream to form ‘soft peaks’, it means that the cream is beaten just enough for little peaks to form, but will fall over as soon as the beater is removed.

Once the soft peaks have formed, take half of the beaten cream and store it in the refrigerator to use as your whipped topping later! Continue beating the rest of the cream until you have ‘stiff peaks’. Stiff peaks are sharp peaks that can stand on their own even after the beater has been removed. (If a recipe ever asks for ‘medium peaks’, that means that the peaks will stand pretty much on their own, but with a slight curl at the top.)

Once your whipped cream has peaked, add half to the white chocolate mixture, gently folding it in. Then, add in the rest of the cream to the mixture.

How to Serve White Chocolate Mousse

Once you have everything whipped and mixed together, divide the mousse into four serving glasses. I used lowball glasses, but ramekins, espresso cups, martini glasses, or any cute small bowls work just as well. Let the mousse chill for at least an hour (or even overnight) before serving. Top the chilled mousse with whipped cream or any toppings of your choice. 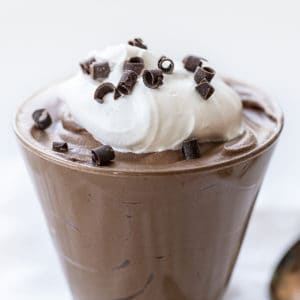 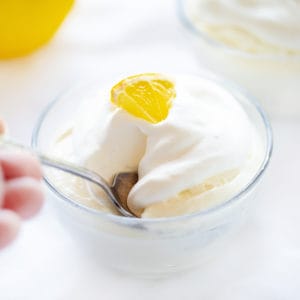 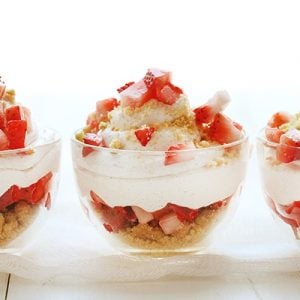 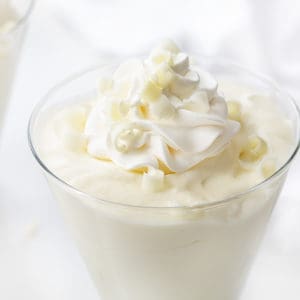 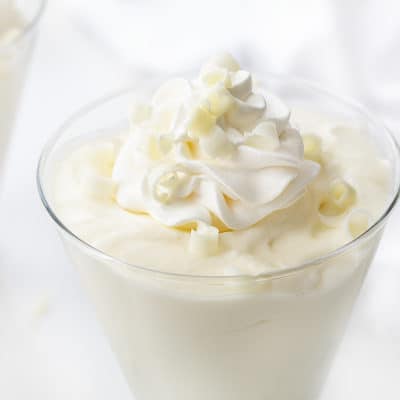